Not very exciting, I know, but bear with me.

It's been a gorgeous day here. I, sadly, have had way too much to do to be out in it. But it was fine. When Anna went to Drama at 4:30, I'd lie out in the sun and read the book my Mum recommended & I have been wanting to read for ages. That, by the way,is 'Before I go to sleep' by S J Watson. There may even be sipping of Chardonnay.

So, I was just putting the finishing touches to my work when I heard a rattling in the conservatory. I realised it had gone from gorgeous sunshine to pouring rain in seconds.

I managed to rescue the bed linen from the washing line before too much harm had been done. Then the heavens really opened. Soon the water was almost ankle deep. The accompanying thunderstorm was very loud & very scary.

I texted Bob to commiserate that our night in the garden was not going to happen. He was mystified. He was barely 3 miles away & there was no sign of the storm. He couldn't believe the extent of the deluge!

I'd not seen as violent a rain storm in this country. It's the sort of thing I associate with Spain in May, not Scotland.

The heavens opened again as I went to pick up Anna. When I'd dropped her off, people had been enjoying barbecues in Howden Park, now it was a deserted, sodden, gloomy mess.

The moral of the story is not to waste a moment's sunshine. If it comes back tomorrow, I'll be out there with my book. After Free Practice from the Monaco Grand Prix, of course. 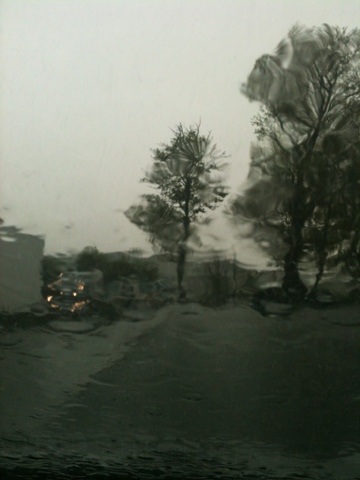 Email ThisBlogThis!Share to TwitterShare to FacebookShare to Pinterest
Labels: This was the scene outside the Centre