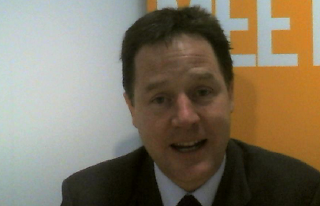 This afternoon, party leader Nick Clegg spent an hour and a quarter being questioned by members over the internet.

He was sitting in Party HQ at Great George Street, ably assisted by the Divine Ms Duffett and we all joined in the webinar - or clegginar as it quickly became known across Twitter.

By way of keeping his strength up, Nick helped himself to some nearby Polo mints. Some got a bit arsey, if the truth be known, about the fact that Nick bites rather than sucks his polos. Whatever happened to "none shall be enslaved by conformity?" But then, as a mushroom lover, I'm probably off his Christmas card list now... Mind you, I wouldn't be eating Polo Mints anyway, given that they are made by the evil Nestle.

He answered questions on everything from last week's elections to web snooping to Lords Reform and actually had the look of a man who was thoroughly enjoying himself. He was particularly passionate on his favourite subject - the Pupil Premium and gave us the heads up that he's giving a speech next week about how schools are spending the extra money they are getting for kids from poorer backgrounds.

He made the point that for every £8 that the Coalition has cut spending, Labour would have cut £7 and said that even at the end of this Parliament, we'll be spending the same proportion of GDP as was being spent from 1995 up until the collapse of the banks in 2008, so it's hardly some great ideological roll back of the state.

My absolute favourite moment was right at the beginning when Nick was asked about how the Queen's Speech was put together. "I wrote a lot of it", he said.

On the key issues of web snooping and secret courts, he came away I think with a C+, ok, but less than I would have liked. I don't like it when people mention paedophiles and terrorists in connection with this stuff as if that made it perfectly ok to compromise the freedoms of the vast majority of us who are neither of these things. He also brought up the fact that there wasn't going to be an Orwellian database which is a bit of a red herring in the current debate. What was clear, though, was that it would have been an actual bill in the Speech if Nick hadn't put his foot down. The draft Bill will be scrutinised within an inch of its life by civil liberties groups, ISPs and all interested parties - a Committee will hear evidence from all of those organisations and make recommendations to the Government. Nick made it clear he wanted to see less surveillance so he gets a plus for that. I think it's up to those party members who know about the technical stuff to educate our parliamentarians and their SpAds if they can.

And at the very end, Helen Duffett pointed out to him a tweet that I'd posted saying it looked like he was enjoying himself and he told everyone that he and I went way back and recalled those days tramping round the doorsteps in the East Midlands. There was one time during the Euro selection when he flew back from Brussels where he worked at the time in the middle of the night to deliver leaflets on polling day in a by-election in Sandiacre. We won!

Anyway, I've collected what I think are a representative sample of tweets. The spelling on some of mine is atrocious. Spelling literacy wrong is something I won't live down in a hurry. It is quite a challenge to keep up with what's going on and cover it in bite sized chunks of 140 characters, so please cut us some slack. Enjoy.