Easter holidays: Black Isle bliss in a Boathouse - and a beautiful baby, too

So, I said to the Liberal Democrat Voice team just before I headed off for a week in the Highlands mostly sans internet signal "Don't let anyone do anything interesting while I'm away." That worked out well.

A wee bit of insight into how normal people live, though. When I found out about Margaret Thatcher's demise I was in the car en route to my sister's for some baby snuggling. On arrival, I told my niece. In my own house, I'd have switched onto the News Channel and kept that on in the background all day. They were watching the Simpsons Movie. And they kept doing so. When it ended (a blessed relief, let me tell you), I asked if we could see some news. After just ten minutes, they got bored and put something else on. I always new that my political geekery was weird, so this wasn't a revelation

We stayed in the Boat House on the Rosehaugh Estate near Avoch. I've loved the Black Isle with a passion all my life. Rosemarkie beach is one of my favourite places on earth and my Great Aunt Vera and Great Uncle Sandy lived in Fortrose for over 20 years.

The Boathouse itself is beautiful. It's very well equipped and decorated inside. I wasn't so keen on the evil spiral staircase, but I loved the view from the bedroom -  even though I wasn't quite to wake up to this on the first morning: 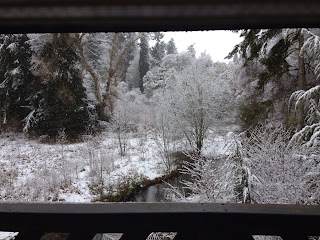 It wasn't a particular surprise that it could snow on the Black Isle in April. It did last year, just a few weeks before my sister's wedding. At least this time the power didn't go off, although we did scurry off to Inverness to buy a couple of torches just in case as there were none in the house.

The Boat House has a lovely terrace and I'd envisaged spending lots of time out there reading, but although the weather improved, the temperature only really got higher than Baltic on the last day.

Here is the house itself: 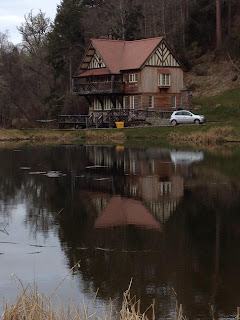 When it was originally built over 100 years ago, it sat on the middle of the lake, not at the end of it and was only half the size. The Estate restored it and added the extra wing which contains the kitchen and one of the bedrooms in 2006.

There are lots of walks round about. Just down the road is a very pretty waterfall. 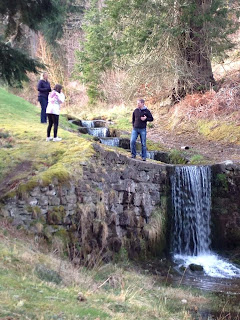 The lovely people in the photo are my lovely brother-in-law, niece and sister. I'm on the nice safe path with the baby.

I'm not good at anything that isn't a nice path - but fortunately my husband and daughter are much braver than me. 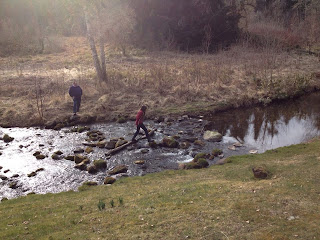 One disappointment was that we totally mistimed our visit to Chanonry Point, arriving at high tide, so we had no chance of seeing the dolphins. 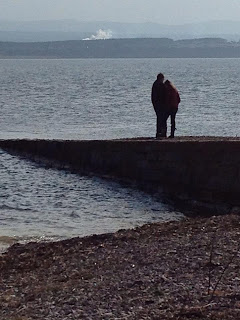 We enjoyed exploring the Estate. I just wish we could have been there in its heyday. It's so sad to think that all that's left of this magnificent house is its terraces.And the wine cellar.

We found these cute pixie houses, too. 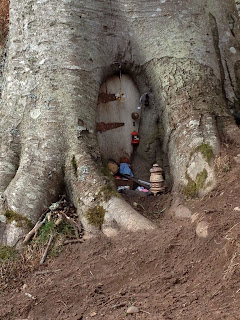 The real highlight of the holiday was meeting my younger nephew Baby Ethan for the first time. I spent lots of time snuggling him and looking at him in utter awe and amazement. He's such a perfect wee thing. Not that I'm biased or anything. And he clearly adores his Auntie Caron. All my nieces and nephew are perfect, of course. And they all adore their Auntie Caron too. 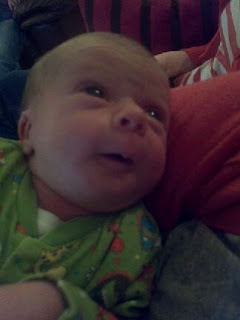 I hate being away from the wee one, though - I saw how much he changed just over the course of a week and he'll be all grown up before we know it.

It was a lovely week away - and I coped better than I thought I would with the social media and internet deprivation.

Now I'm back and my to-do list is very long and scary. I'm sure there aren't enough hours in the day for it.
Posted by Unknown at 1:03 pm