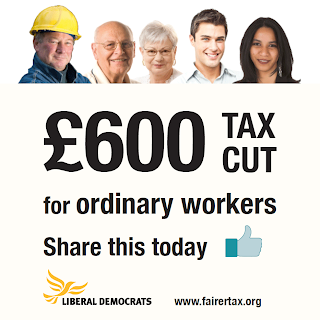 Liberal Democrat Secretary of State for Scotland, Michael Moore has welcomed further tax cuts for Scottish workers coming into force today. If you're playing "stronger economy and fairer society" bingo, he's got that in there too.


This Coalition Government has brought fairness back into the tax system. We want people to keep more of their hard earned money and that's why on 6 April, people in Scotland will receive a £600 tax cut.

I'm delighted that the Liberal Democrat manifesto pledge reaches so many people: 2.2 million Scots will benefit from the tax cut with 186,000 lifted out of paying tax altogether.

We are building a stronger Scottish economy and a fairer Scottish society and what better way to do that than to give Scottish workers more of their money back to spend in the economy.