Bill Walker must go: how you can have your say 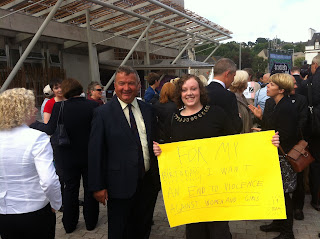 Willie Rennie has written to Bill Walker, the MSP for Dunfermline who was convicted of 23 instances of assault against 3 ex wives and a stepdaughter over a 28 year period to ask him to resign his seat in the Scottish Parliament. Here's his letter in full:

You will know that, unlike others, I did not call for you to resign before the judgement of the court as I strongly believe in innocence until proven guilty. But now you have been found guilty I believe it is time for you to go.

It would be untenable for you to remain as a public representative after being found guilty on twenty three counts. Firstly, it would send the wrong message about domestic violence to the victims and the perpetrators. Secondly, I cannot see how you can perform the duties of a MSP when many of your constituents are already turning to other parliamentarians for assistance because of the conviction.

Even if you plan to appeal the conviction the right thing to do would be to stand down during that process rather than undermine the institution you were so proud to be elected to in May 2011.

The picture above comes from a crowded protest at Holyrood on Tuesday. Edinburgh University Liberal Democrats President Hannah Bettsworth celebrated her 19th birthday there as representatives from Zero Tolerance Scotland and Scottish Women's Aid demanded that Walker resign and called for a change in the rules regarding these issues so that the choice would not be his to make. The picture above shows Hannah with Jim Hume, Scottish Liberal Democrat MSP for the South of Scotland.

There is now a Bill Walker must go Facebook page which has attracted more than 400 likes since it was set up yesterday afternoon. I should declare an interest and say I'm helping to run it.

One of the first things Willie Rennie did after Walker was convicted was to put down a parliamentary motion, so far backed by over 80 MSPs, calling on him to go. Now he is giving the public the chance to have their say as well, by setting up an e-petition which you can sign here.

Mike Crockart MP has also put down an Early Day Motion at Westminster which has been signed by most Scottish Liberal Democrat MPs who are eligible - Moore, Alexander, Swinson and Carmichael are all ministers so they don't generally sign EDMs. It is short and to the point:


That this House believes that Bill Walker MSP should vacate his seat in the Scottish Parliament immediately.