We never found out about her birth for two days. They didn't have mobile phone then, or the internet.

I thought I'd share with you, not in any sort of order, not even chronological, 21 delightful snippets of life with a cute baby who grew up into a wonderful, if opinionated, but highly intelligent, kind and compassionate young woman. I am not going to post any current photos of her because she deserves her privacy, but this was her as we first knew her: 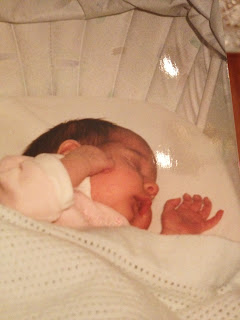 1. That first view of her in her incubator, wearing just a nappy, and sometimes not even that as she had jaundice and was getting phototherapy. That was pretty much it. Auntie/niece bonding took place before I even noticed.

2. A toddler. In pink pyjamas. Singing "Can you feel the love tonight?" from The Lion King

4. It was crazy, but necessary, for the only member of the family who hadn't had chicken pox to look after Laura when she came down with them. She had been going to start nursery that day and got the Chicken Pox and her lunch box confused. And, yes, she shared them with me. She had 42 spots on her entire body. I had 42 on my right shoulder. But those were special days filled with ice cream and fun.

5. Her Uncle Bob pretty much did her bidding. He played whatever part she demanded, and the parts she demanded were not in any way glamorous. He was her prisoner, or her horse. Funnily enough, Anna and her friend Molly, years later, used to make Bob be their horsie and put blankets over him and confine him to a pen.

6. A curious 6 year old asking an elderly aunt if her husband of almost six decades had been "sprinkled yet" at his funeral tea. Said wonderful elderly aunt thought this was hilarious.

7. The "Fook Nick Clegg" incident. Exactly one year ago. Strong drink had been taken. I heard giggling from the kitchen and realised that my phone had disappeared at about the same moment as a voice asked me who was the most famous name in my contacts. I was there in a flash, but that question was a red herring. She'd already put up a Facebook status that read as follows: 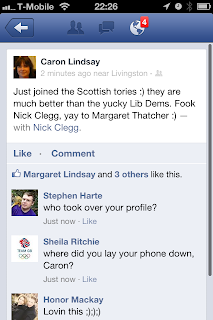 I love that my friends knew it was nonsense.

8. Heading into Edinburgh with her a couple of days after the above for her first day of Freshers' Week. She was pretty nervous, but made friends almost immediately and flew through her first year. I am a very proud auntie.

9. 2009. Nightmare year for both Laura and I, both independently catching Glandular Fever. Both of us were horrendously ill in different ways. There was that day when she lay on one sofa, I lay on another and we both just groaned. But we both got there in the end.

10. Mill Farm, Livingston, later that year. One of my first trips out following the Glandular Fever. Except I am not the steadiest person on my feet at the best of times. So I slid. In some mud. And ended up on my arse. My family still laugh about this, compassionate bunch that they are.

11. Earlier this year, I got the funniest abusive comment ever on Liberal Democrat Voice. It never saw the light of day, but the gist was "I can't tell your gender, your cheek bones are too wide set apart......(about 1000 words of gratuitous abuse).....It's just dawned on me what you are - a one tonne fresian cow. All you need is a ring through your nose and I'll sell you at market." So I put the edited highlights up on Facebook. Within seconds, my Laura replied "Can I have some milk". Hah. Cheek. And I bet Lord Greaves would be disgusted that I censored that comment, just as an aside. But believe me, I can never forget it because my family thinks it's hilarious.

12. A lovely dinner on the eve of an exam. Steak and mussels were consumed. The exam - she smashed it.

13. A vision, in teal, in a tiara with hair, unusually, curled, skin blooming with first encounter with a tanning gun, following her mother down the aisle as chief bridesmaid in April 2012.

14. I know my lovely husband gets scared whenever he knows that Laura and I are going shopping. But I have not taste and she does. And if you like what I'm wearing it's because she chose it. And she will always make me go out of my comfort zone.There is no choice. She's like a mini tornado round the shop. I get a pile of stuff to try on, she approves, she disapproves, I buy what remains. It's perfect.

15. This year, she's like a lionness with her baby brother. Nobody else was ever going to be godmother, but she can make him laugh with delight. He's only 5 months old, but he's going to idolise her in future years. And when he's a young lad, he's going to love having a cool older sister to stay with.

16. Trusted enough to be left in charge of Granny and Grandad's doggies last year, they took all of a few hours to end up in bed with her. Just as Granny and Grandad would have wanted. I remember a chilly day in the park throwing frisbees for Maya as Magan explored.

17. The day of Russell Johnston's memorial service in Inverness, sitting round my sister's table talking with Laura, just back from Belladrum.

18. Facetime. Laura travelling in a hotel in Lyon, chatting over the wifi. Then I realise what she can see is me in my pink pyjamas looking hideous on my sofa.

19. The worst snowstorm in some years in Paris. Laura is stuck there and it's nearly Christmas. She's supposed to be going home. Chatting over Facebook.

21. 20 December 2011. Echo Arena, Liverpool. Paul McCartney comes on stage. Laura's face. Beatific doesn't even begin to describe it. One of the highlights of my life. A happy girl seeing her (and my) idol perform. It was two days of fabulous BeatleMania, with my sister as the Responsible Adult making sure we got to where we needed to be. We did the Beatles Museum, and the Magical Mystery Tour with its Strawberry Fields and Penny Lane and everything. Two days in heaven.