How Hannah spent her birthday - the Bill Walker protest in pictures. 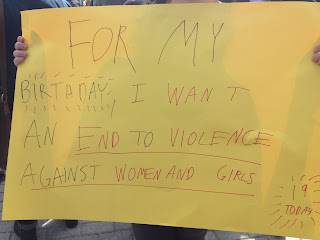 Hannah Bettsworth is a fabulous Liberal Youth Scotland member. She's the president of Edinburgh University Liberal Democrats and today is her 19th birthday.

And where was she in the glorious sunshine?

Outside Holyrood protesting against Bill Walker, the convicted violent abuser (TM Better Nation) who refuses to resign from the Scottish Parliament.

Lots of other lovely people were there too. 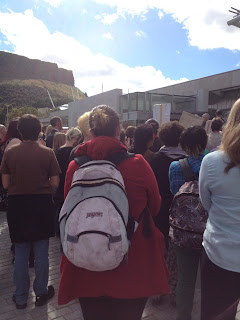 Including this one. And an honourable mention if you can guess who is holding this. 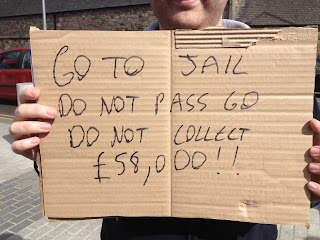 Four of the five Liberal Democrat MSPs were there - and, in fact, I saw some from every party. Even Tories.

But mostly it was women come to express their horror that a man with a long history of violent abuse of women and who has shown not the slightest sign of remorse, is still able to represent them in Parliament, able to vote on matters relating to domestic abuse, which the Parliament will be discussing in the new legislative programme. Today was the Holyrood equivalent of the Queen's Speech except we get Alex Salmond.

I wonder what it's like for female MSPs, knowing that Walker might appear. They know that in any interaction they have with him that he doesn't view women as equals and has a track record of harming them. That must be quite difficult to handle. I feel uneasy just knowing that he's a member of my Parliament. It bothers me on behalf of the women of Dunfermline, especially those who have been exposed at some time to domestic abuse themselves, that he can have any role in making laws that they have to live by.

I didn't take any pictures of Hannah herself, sadly, but I wish her a very happy day and successful year ahead and I hope that we make some progress in the quest to stop violence against women and girls in the next 12 months.