Willie Rennie talks about domestic abuse and Bill Walker, Yes Scotland supporter tweets he has a "face you just want to hit with a shovel"

Willie Rennie went on Channel 4 News to talk about why he wants to see convicted violent abuser Bill Walker MSP (TM Better Nation) out of the Parliament. He talked about how he wanted to see a recall law to enable people like him to be forced out if they won't do the decent thing and resign. Walker, you may remember, was recently convicted of 23 counts of violent assaults against 3 ex wives and a stepdaughter over a 28 year period.

In a quiet corner of Twitter, some independence supporters were talking about him. Here's how the conversation goes: 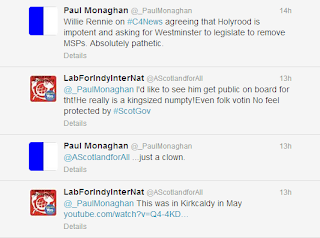 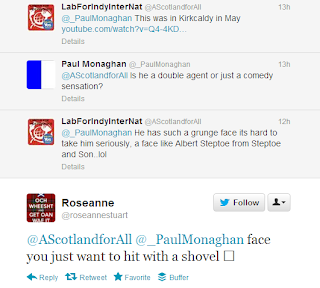 Delightful, isn't it. Yes Scotland supporter Roseanne Stuart says that Willie has a face you want to hit with a shovel.

The equally pleasant LabForIndyInterNat, who said Willie had a grunge face like Albert Steptoe's did us a bit of favour though. He posted a video I hadn't seen before from an independence debate that Willie took part in in May. It's to Willie's credit that he was eminently reasonable, and a bit funny at times. But compare his approach to life to these rather sad people. He was really complimentary about Nicola Sturgeon, calling her one of the best ministers in the Scottish Government. I happen to agree with him on that as I have a lot of time for Nicola, but it shows a generosity of spirit which appears to be lacking on the Nationalist side at the moment, most obviously with Alex Salmond's comments that the pro UK stance is "against Scotland."

Anyway, if you have a spare hour and a half, it's worth a watch.


UPDATE: I should add that a nationalist friend of mine has pointed me on Facebook to a couple of pretty vile tweets about Alex Salmond. This one is particularly unpleasant and I link to it just to show that this stuff happens on both sides and that wherever it does, it's bang out of order.

Like Nick Ross at the end of Crimewatch, I probably ought to add in a "don't have nightmares - most people, whatever side they are on, are pretty reasonable. Let's hope it stays that way. All of us who are involved in the debate need to try and bring light and respect into it as well as robust analysis.
Posted by Unknown at 9:44 am