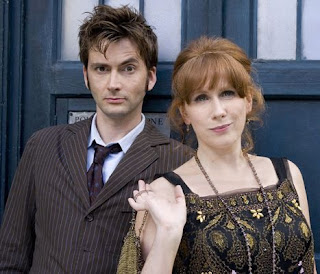 You'd probably have to take Glandular Fever out of the equation for this to be the perfect day, but it has enough elements for me to be feeling cheerier than for a long time. I'm not even feeling that ill today - which is a huge improvement. Bob and Anna are both at home and we are having a completely chilled out time in the sunshine.

I'd definitely buy a drink for both Jonathan Ross (for taking holiday) and the person at the BBC who decided to get David Tennant and Catherine Tate to sit in for him on Radio 2. They are doing a grand job, even though they have managed to completely slag off Twitter - saying it's sad, but at least they had the good grace to admit they were wrong. They are certainly making the long wait ahead of the new Doctor Who special tonight bearable.

In a way, I don't want the hours to pass too quickly. David Tennant only has 3 stories left and then the best portrayal of the Doctor ever will be over. I don't say that lightly, either. The Doctor has been played, very well, by some fantastic actors, but Tennant has the edge for the way he just seems to pull off, perfectly, everything I like about the Doctor. The way he combines mystery, pathos, humour and compassion in such a plausible way is brilliant. He is the perfect Doctor for his time in the same way that Tom Baker just seemed right as I was growing up in the 70s.

When Baker left, the powers that be chose a much younger, albeit well-established actor in Peter Davison to replace him. He was fine but was rather eclipsed by his predecessor. We will have to see how Matt Smith takes up the challenge next year.

I've had a bit of an Amazon flirtation this morning and bought Party Animals, the drama about Westminster researchers from a couple of years ago, which Matt Smith starred in, along with Bob and Rose, another brilliant Russell T Davies drama.

David Tennant has just announced that John Barrowman will be on the show soon - I think I need smelling salts as I can barely contain my excitement. I may have to go and lie down in a darkened room........