Active sexism as part of a marketing strategy, Lord Sugar?

We're used to seeing sex being used to sell products. We're used to seeing ads built on an unhealthy foundation of sexism. Remember that really irritating washing up liquid ad from the Olympics which suggested that mums were just there to wash dishes while their sons became athletes?

All this stuff is quite subtle and when confronted, the companies shrink back in horror from accusations of sexism.

However, I wonder if Lord Sugar has branched out today with a new strategy of using sexist comments to get attention for his products.

So far so good. Now we get to the sexist bit. Part of the marketing strategy is aimed at persuading employers to buy this for their "lady staff". I kid you not.

Lord Sugar himself is enthusiastically tweeting every couple of hours or so inviting "girls" to ask their boss to get them these nail files for Christmas to show their appreciation of their hard work.

Well, frankly, I'd prefer a bonus, or even a commitment from my employer to close the gender pay gap, or to get more women on their board or whatever. That aside, though. Lord Sugar is being patronising and sexist. That's not particularly new from him, but he's also not daft. He knows full well that nobody goes and asks their boss for a specific Christmas present. I can just imagine what he would say if any of his employees did that and it probably involves a couple of expletives and the word P45.

I think he knows that by saying such a blatantly sexist thing on Twitter, he'll provoke some controversy. Serena FitzGerald replied to him, calling him out, very politely for his sexism. For her trouble she got a three word reply. Simply, "Shut up, idiot." The photographic evidence is here: 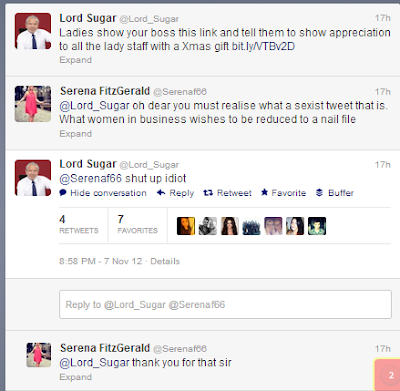 It's out of order, really. Blocking her for a polite tweet was way over the top, too. But it's a provocative act which might well get some publicity for his product. Alan Sugar is many things, but stupid is not one of them. I think this is a deliberate attempt to up sales by creating a Twitter storm and Serena has found herself in the middle of it.

I only found out about all this after I'd sent Alan Sugar a reply when I saw a similar tweet about the product from him today. He hasn't blocked me yet, but I'm sure it's only a matter of time.

It may be a deliberate marketing strategy, but I think it's one which should be doomed to fail. What Sugar has done, of course, is insulted someone who should be part of his target market. What he really should do is apologise to her and unblock her. I won't be holding my breath for that. Misogyny shouldn't sell.

At least Lord Sugar was shown some support by a Labour Party colleague in Scotland. Ian Smart is known for his sharp and occasionally reckless wit and tweeted me that:

I'd just bought a job lot as a peace offering to @womenforindy. Do you think I should cancel?

I wish he had, and that I could be there when they opened them so I could help them thank him appropriately.
.
I shall leave the last word to @crazycolours whose crown jewel in a succession of very funny tweets to Lord Sugar was:

If you buy Margaret that, she'll slot you in the throat.

Can't you just imagine her hard stare which is enough to reduce most grown-ups to gloop?