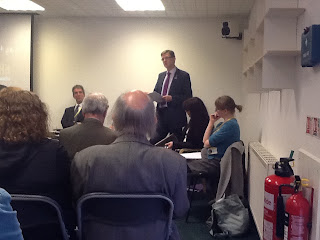 The Liberal Democrats have done a lot of good in this coalition government, from ending child detention, to cutting income taxes for low paid workers to ensuring fair pension increases every year with Steve Webb's triple lock, to giving extra money to disadvantaged kids via the Pupil Premium, Nick Clegg's £1 bn Youth Contract and the extra money he's given to ensure half a million people get good treatment for mental health problems in England.

It's an impressive record. But there is bad to go with the good. Regular readers will be aware of my FFS list - that short but still worrying list of places I wish we hadn't gone. Right at the top is that part of welfare reform which cut benefits to sick and disabled people. However much we know that if the Tories had been left on their own to sort the welfare system, they would have been even worse, the reality of the Welfare Reform Act is something that many Liberal Democrats feel very uncomfortable with.

We are not, however, sweeping it under the carpet and pretending it isn't there. The Hardest Hit came to our Scottish conference in Dunfermline at the weekend and held a fringe meeting at which they told us about what some of the most vulnerable people out there are going through. The room was absolutely packed, showing that many of us care deeply about this issue and want to know how we can help.

The video that they showed us was hard to watch. Disabled people's fears about what may lie ahead were laid bare:

One point I would make, though, is that many, most even, of those who fear will not have their benefits taken away from them. Friends of mine went through months of hell worrying about having to go through the Work Capability Assessment. Now, I'm as cynical about ATOS and the system as anyone else, but even I was certain that there was no way they would be affected. And they weren't. But they went through hell. What happened to them was not humane. People have had two years of worry about the prospect of losing their benefits and that's just not fair. These are people who are already fighting their physical or mental condition to start with. They don't have the energy to put up with the insecurity and uncertainty, or the reality of losing their benefits as well. If people are being driven to want to commit suicide because they worry they are going to starve to death if they lose their benefits, that's something that we need to address. Now.

There have been some welcome changes to the Work Capability Assessment, but it's still not something which commands confidence among people. They don't trust it, and their cynicism about it is justified. Listening to Carolyn Roberts from SAMH talk about how a man who had barely left his house in 25 years due to Agoraphobia was put in the work related activity group, thus losing his benefits, made me furious. Let's hope that family gets the help they need to have that overturned on appeal - but, again, that is an incredibly stressful process, and very long drawn out. Often, once an appeal has been successful, the person barely has time to catch breath before being dragged in for the next assessment and the whole treadmill starts again.

Last year, I spoke at an RNIB fringe meeting on welfare reform. I was completely outclassed by Ken Reid (although I was pretty much on his side), the chair of RNIB Scotland. He is such a compelling and captivating speaker. Last year he asked us to imagine being suddenly blinded - it would take much more than the year you would get ESA for to get used to being blind and coping with life, let alone getting to work. This year, he talked about the Work Capability Assessment which he described as cruel and inhumane. He talked about the extra costs of being disabled - for example, he said it costs £800 for software to make your computer talk to you. He talked also about the disadvantages faced by disabled people in the job market, as well as the limitations to the jobs they can go for.

Carer Jacqueline then talked about the challenges of caring for her severely autistic daughter. She told us how it can take 3 hours to get her ready, and how her behaviour can be incredibly challenging to deal with. She's doing all this on around 2 hours' sleep a night. It's not the best environment to have to take on a whole load of Government bureaucracy as well.

Mike Crockart, MP for Edinburgh West, talked about his work on relating the WCA to human rights and how his committee had been very clear that the Work Capability Assessment had to take into account social and environmental factors.

I made a brief contribution right at the end, repeating my strong belief that we need Nick Clegg to call out David Cameron or any other Tory when they come out with their "scrounger" narrative. That seemed to have a lot of support in the room.

One of the fundamental tenets of liberalism is to protect citizens from abuse by the State. The Department of Work and Pensions doesn't always get it right. When it mucks up, it, like its friends HM Revenue and Customs and the UK Border Agency, it is very reluctant to admit or sort it. I think that we as a party need to do two things. First of all, we need to get evidence of where this new regime is letting people down. Hard evidence. And make sure our ministers know about every single case. We must not give up on them.

Secondly, we need to put our heads together and work out how best to challenge the system, how to make sure people going through it have a better experience. I wonder if we could learn from the likes of Citizens UK, who turned up at UKBA HQ with a caravan with nuns serving tea to the staff. That got them into high level talks and as a result small but significant changes have been made at reporting sessions. The frontline DWP staff are often poorly managed, underpaid, stressed and have little power within the organisation. They in turn are the point of contact with extremely vulnerable and often desperate people. It's a recipe for disaster and has to change. It will take inspirational leadership to change the culture at the DWP, to make people feel that they are being treated by human beings, not criminals.

We're not, as a party, in a place where we'd choose to be. I am glad that groups like the Hardest Hit and Scope, with whom I attended a very useful round table discussion in Brighton at Federal Conference, recognise that we do have a commitment to ensuring fair and proper treatment of people in the benefits system. George Potter's Equal Citizenship motion passed at Conference shows where our heart is.