Michelle Obama is a formidable woman. She combines intelligence with warmth and is an inspiration to a generation of women not only in the US but worldwide. A magnetic personality, you might say.

Who can forget the affection she inspired after her visit to a London girls' school in 2009. Look at this. Three years on, it still makes me cry.

She had a message so important for girls to hear:


"We need strong, smart confident young women to stand up and take the reins. I want you to know that we have very much in common. Nothing in my life's path would have predicted that I'd be standing here as the first African American First Lady of the USA.  wasn't raised with wealth or resources....you too can control your own destiny. Please remember that."

She's had a real impact as First Lady with her campaign to get families exercising and eating healthily to combat childhood obesity and to get people giving armed services veterans the support they need.

But while she does all this good work, she's undermined by the usual sexism in the media. Try and find a profile or article about her that doesn't mention her clothes. I mean, how is it news that she wore the same outfit twice?  You might expect that from a US entertainment site, but the BBC should know better.

It was profoundly depressing to see, on BBC Breakfast yesterday morning, the two presenters joking about a piece of Michelle merchandise: 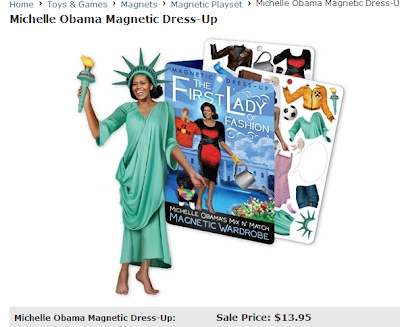 Heavens above. And while the BBC presenters were joking about it, there was nothing in their comments which indicated that there was anything just a bit sexist about the product. Did they just not see it?

This is just another example of the casual sexism which permeates our everyday lives. When there's a female President, as I hope there will be in 2016 (go, Hillary), I bet if she has a husband, he won't be subjected to this sort of magnetic misogyny.
Posted by Unknown at 12:27 pm

I would have thought Michelle Obama would have had to give permission for her name to be used on the toy so why don't you take the matter up with her. If I am wrong then you may have a point.

I think you can trademark your name but I doubt she has - the press would have trashed her for being a diva if she had.