I was interested by a profile in yesterday's Sunday Mail (that's the Scottish sister paper to the Daily Record, not the Fail on Sunday) of Liberal Democrat Secretary of State for Scotland Michael Moore. The picture in the online article is a bit scary - Mike does look a bit as if he's about to pounce out of the paper, but never mind. 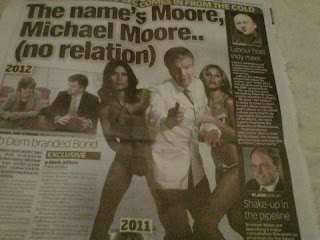 The Mail has been pretty unpleasant about Mike in the past. Last year they presented him with a cardboard cut out of him that they'd taken round the streets.

Yesterday, though, it seemed they had had second thoughts as they devoted a fair bit of space to quoting John Rentoul's profile of him, which described Mike as Westminster's answer to James Bond. Then they have quite a long (for them) interview with him.

He told them that their cardboard cut out no longer "freaks out my daughter Ella as much as it used to."

On the forthcoming independence debate he had this to say:


Scotland can be independent. The question is on what terms.

My view is the opportunity and security is greater staying where we are.Our focus as the UK government is to work through all the big chunky issues that affect people’s lives like what would happen with their pensions and what currency they would be using...

...We are determined it is strong, well-founded analysis that people outside government can share and inform the debate.

We will also be looking very carefully at what the Scottish government present as their arguments on issues like EU membership, currency and regulation of the banks.

Over the past few months, as they have asserted how they will work and people have challenged and pushed back, their arguments have crumbled. And we will continue to engage robustly on that side of things.


By the way, Mike is not only receiving praise from the Mail and Rentoul, but he's had a major rise in this month's Liberal Democrat Voice satisfaction poll, now back in the top five Government ministers. Willie Rennie's had a big rise in his rating, too, which Stephen Tall explains:

Yes, while I don't see him as Machiavelli or Bond personified there is no doubt Moore was initially underestimated by a few people when in fact he is an extremely capable minister.