And who exactly is extraordinary - in Nick's words "every single person".

I can't begin to describe how hideously bad I'm feeling so this is going to be more of a series of bullet points rather than an attempt at serious analysis. Luckily, someone else has provided some excellent words to describe what drives us as Liberal Democrats and where our principles come from so I'll let the man we elected as leader earn his money!

Every manifesto needs to have an idea at its heart. The basic idea that animates this manifesto is something I have always believed. I believe every single person is extraordinary.

The tragedy is that we have a society where too many people never get to fulfill that extraordinary potential.

My view – the liberal view – is that government’s job is to help them to do it. Not to tell people how to live their lives. But to make their choices possible, to release their potential, no matter who they are.

The way to do that is to take power away from those who hoard it. To challenge vested interests. To break down privilege. To clear out the bottlenecks in our society that block opportunity and block progress. And so give everyone a chance to live the life they want.

There’s a simple word for those ideas, and it’s a word this manifesto is built on: fairness

Nick's words were prefaced by a sombre Sarah Teather describe how a child born in a poor part of her constituency was likely to die 13 years before a child born on the same day in affluent Kensington. She specifically mentioned poor housing and the effect it has on health as one of the causes.

You can read the whole thing, or as many or as few of its sizable component parts here. 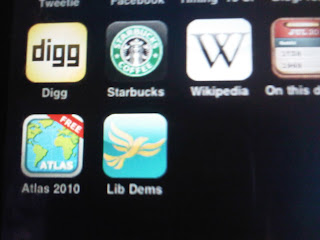 For all my Apple loving F1 friends, yes, there's an iphone app and a Blackberry one too, which I haven't yet got round to installing. Look!

What struck me was how much Nick has grown in confidence in his 2 and a bit years as leader. He's still the straightforward, genuine person I first met 12 years ago, but he really has got a lot better at fielding awkward questions from hostile journalists. Asked if we weren't soft on crime, he replied that, actually, with their policy of locking up young men who come out 92% likely to re-offend, the other parties were stupid on crime, not tough. Beautifully done.

Asked if he wasn't miffed that Vince was outshadowing him, he said with grace and humour that he was proud that the most trusted politician of the day was on our team.

Final point of the day - I loved the way Danny Alexander started off the elephant theme, talking about how the deficit was the "elephant in the room" that Labour and the Tories were ignoring.

The Almighty Vince then joked that this must make him the "elephant man."

I'm sure that this was not just a valid political point, but a tribute to our very ownlovable, original and highly articulate elephant.If you aren't reading every single word he writes, you are missing out.
Posted by Unknown at 3:09 pm