This is my last from the Middle East, Amman Airport to be exact. 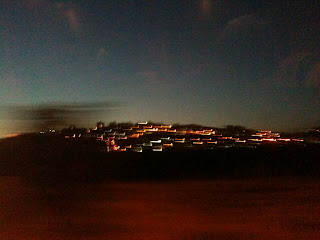 Jericho where the Israelis will rebuild the wall
If I have learned anything from this trip it is that the Israeli Government and the Quartet have no real interest in the 'Two State' solution. In East Jerusalem and the West Bank/Palestine they are guilty of what I can only describe as ethnic cleansing (think native Americans or even the Clearances). I've seen people's land, homes, religious centres, economy and culture slowly destroyed by a regime that seems determined to drive them out of their own land. I know that sounds hard but sadly it seems to be true. 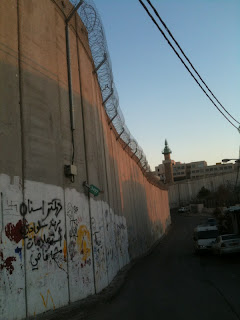 The wall. For Israeli students the walk to university is a mere 500m, for Palestinians, it's 4 km and 6 checkpoints

They are implementing an apartheid system where the Palestinians are third-class citizens and cannot even use the best roads. The Israelis have even built tunnels for them to use to reach their towns, villages and farms. To top it all they have constructed a monstrous apartheid wall to divide and isolate Palestinians from almost every means of economic prosperity and even education. This wall often means that a journey of 40 minutes can now take 2 hours if you are not Israeli or a tourist.


The wall goes right round Bethlehem where we visited last night. The Palestinian watchman opened the courtyard of the Nativity Church for us to view. Now there are few tourists staying un the town,  as 80% of tourists are bussed to the Israeli colonies for overnight stays.  Mary and Joseph would have no problem getting a room in Bethlehem these days!! 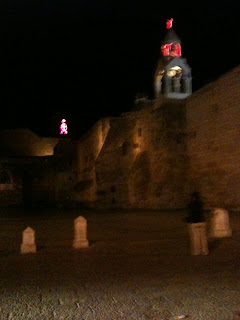 The Church of the Nativity, Bethlehem
I'm sad and depressed at what I've seen here and what is being done to this warm and friendly people who deserve better after over sixty years of oppression at the hands of Israel with the tacit approval of most of the Western world-it's just wrong and almost certainly is criminal.
Posted by Unknown at 8:32 am