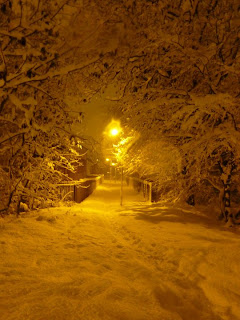 The eerie snowy scene above is not in some remote rural spot. It's literally just down the road from our house.

Very few cars went anywhere yesterday - in fact the street was even featured on the STV news last night - more because of its proximity to the railway station than for being uniquely badly affected, I suspect. 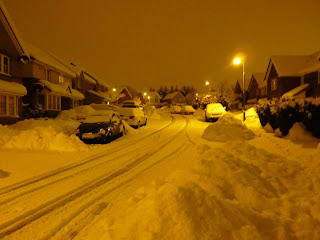 However, those who take the train to work have been, so far, lucky: 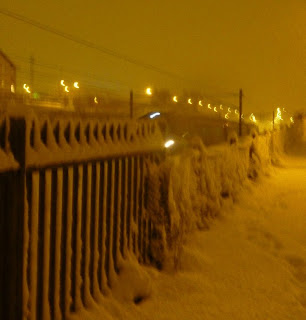 Whether they will get back, of course, is anyone's guess, as Twitter tells me that the usual Winter problem of frozen points has come to pass. 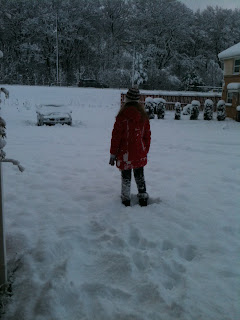 The schools here are shut for a second day - which is fantastic for the likes of me who doesn't have to go anywhere else to work, but must cause child care headaches for those with inflexible and unsympathetic employers. Anyway, Anna took to the streets for hours yesterday. There are various sets of clothing drying on every radiator in the house.

While yesterday was bright and sunny and cheerful, today the skies are dark and threatening even more snow. Please no! We have already been embarrassed by your generosity. Go somewhere else.....

Twitter, though, has been replete with observations about the Wintry weather. Here are three of my favourites:

Former PM's wife and the sort of national treasure who doesn't need to go into the jungle to show us how valuable she is, Sarah Brown, made us all laugh with this:


was out *driving very slowly* on icy roads and spotted digital road sign with typo that read 'DRIVE WITH CAKE'#whoamItoargue?


Fleece lined tights are fab btw; just over half an hour out in the cold and legs still warm despite wearing a short skirt!

I just wish I knew a Sarah White or Black to continue the symmetry, but the last word has to go to Inverclyde Labour MP, David Cairns. Honestly, there is always one who'll try to turn any situation to their political advantage:


Terrible weather highlights the cynical stupidity of SNP plan to hold a referendum on Independence on last day of November.

Now I really don't get the idea of independence for all sorts of positive reasons. I want to see a properly federal UK which has the best of all worlds on autonomy and working together. Even so, I get the symbolism of Scotland deciding its destiny on its special day. I know there's snow everywhere today, but generally round this time of year, folk usually manage to get out, in huge numbers, to the shops. I'm sure they could find the time to stop off at their local polling station on the way home.

Having said that, one area where David is incredibly smart is on issues relating to HIV and AIDS. Tomorrow is World AIDS day and as I write, in a blizzard, he is watching a team of MPs take on a team from the UN at football to raise awareness. The MPs are getting absolutely slaughtered at the moment but in a good cause. Don't forget to do something to mark the day tomorrow.
Posted by Unknown at 11:02 am