Central Scotland Liberal Democrat MSP Hugh O'Donnell is currently visiting Jordan and Israel with an international delegation. Yesterday he sent a report and photographs. This is his account of what he's seen today. 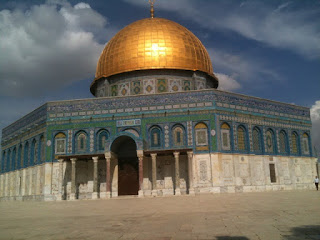 Al-Aqsa Mosque
Day two ends and we have just finished at 10.30pm local time!! Talk about a Cook's Tour.

Today started with a breakfast at 7.30am and a tour of the Old City of Jerusalem and a visit to the Al-Aqsa mosque, A real privilege because unlike local Palestinian men (between the ages of 16-45 years) the Israelis did not stop us going into the holy place.  How ironic that they allow 3 Catholics, one Orthodox and assorted atheists and yet local men can't go there to pray to their God!!!

The one thing this trip has taught me in such a short time is the difference in the economic resources available to the two communities.  it is very noticeable that by far the poorer of the groups is the Palestinian, in every way. Their wages are 60% of the Israeli workers but the cost of living is exactly the same for both. The Palestinian areas are much poorer looking, except where the houses have been taken over by Israeli squatters.


I'm trying to persuade folks to stop using the term settlers as it is not the right image for what is being done. We challenged a squatter in East Jerusalem this morning and asked why he had moved into this house of a Palestinian family who were living in a tent on the other side of the road. He smiled sweetly and said in RUSSIAN "because we can" and then something which I can't repeat, but which basically meant "go forth and multiply" before walking away. No wonder people are angry here. 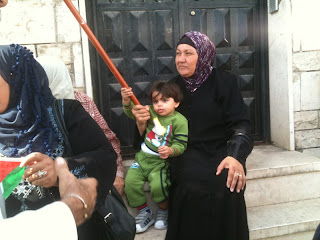 Palestinian evictees outside the house they shared with 17 relatives in total. It is now occupied by 4 Russian Israelis 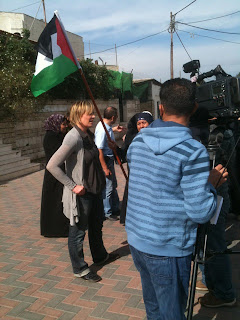 Media interviews after visit to evicted Palestinian women
In Hebron we met the PLA members who had been arrested and imprisoned after the elections in 2006. No charges,  just locked up for up to 4 years, including Dr Aziz. He guided us to the mosque in Hebron which is alleged to house the tombs of Abraham and his wife Sara. The Israelis have converted half of this 1400 year old building into a synagogue and protected the Israeli squatters who use it with an armed guard, checkpoint and other restrictions. This is the mosque where 30+ people were massacred  at prayer a few years ago, just like those terrorists did in Iraq the other day. What are we doing to our world?  When we toured the old city of Hebron we were watched from a nearby building by two IDF snipers and the children of the Israeli squatters threw garbage down onto the market place. 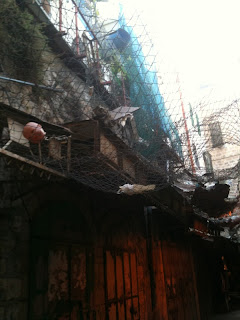 The nets are to protect shoppers from garbage and other objects thrown by Israelis
We also visited the prisoners who had been held by the Palestinian Assembly in Palestinian jails who claimed to be tortured and showed some signs of it too. There is much much more, but tomorrow we go to Ramallah to meet with the PA and maybe even Mr Abbas. 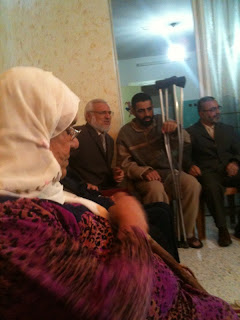 A prisoner of the Palestinian Authority alleges torture. His mother is in the foreground
Posted by Unknown at 10:22 pm