A day in London to celebrate Andrew Reeves

Yesterday I joined around 200 others in the excellent and beautiful surroundings of the Union Chapel near Highbury Corner in Islington to remember our friend Andrew Reeves.

It was quite an expedition for me - and I was the furthest I'd been from Anna and Bob in 12 years, but it was well worth going.

I arrived at Waverley Station in Edinburgh at 8 am yesterday. I realised I'd forgotten to take anything to read, so I went into W H Smith's. I was thrilled to bits to see my friend Keris Stainton's new novel, Jessie <3 NYC in pride of place. 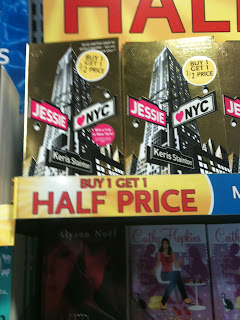 I only managed to read about 60 pages of this book - and loved  them - before Anna nicked it off me. Not only did she think the story and characters were fantastic, but she now wants to go to New York. Good luck with persuading her daddy on that one....... When I finish it, I'll write a review here.

There was a bit of  a poignant moment at Costa Coffee. As I checked in on Foursquare, a tip came up from Andrew recommending the Chocolate Twist. He said "it's the best." Well, I couldn't disobey - and it was indeed delicious.

I travelled down with Andrew's husband Roger. He bore my incessant chatter with great fortitude - and the four and a half hour journey to London passed incredibly quickly.

We decided to check out the venue first and as we came out of Highbury and Islington Tube Station we  found a pub that Andrew would definitely have taken note of because, obviously, of his well known love of fowl of his ability to see smut in virtually anything. To be fair, you don't have to look hard in this sign. 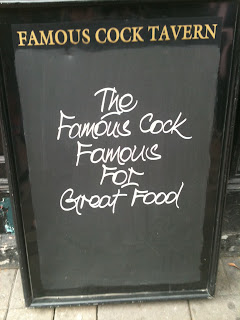 And the food was indeed good and very well priced. I had a fish finger sarnie and skinny fries, one of my favourite things to eat, and Roger had the well filled club sandwich. I had expected London prices to be exorbitant, but that and a pint for him and a small glass of wine for me came to just £18. 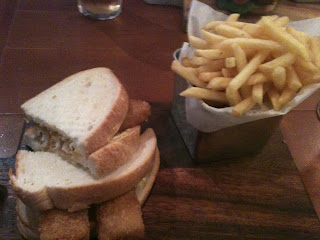 I think Roger had been amused by my bug eyed fascination with the sheer number of people milling around King's Cross. I did feel like a complete teuchter.

After lunch, we went across to the chapel where Rhiannon Wadeson, Sarah Morris, Austin Rathe and Steven Jolly were amongst those setting up. The Chapel itself is an amazing venue. It's welcoming and spectacular at the same time. It just had a feeling about it that it was a venue you could feel safe and relaxed in. On its website it says that it aims for a naturally chilled out environment and that's exactly what it provided. 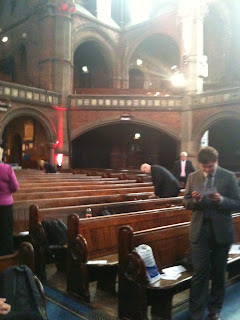 The orders of service were beautiful, and  to my regret, I never actually got one to take home. They were hand tied with pink ribbon and had a photo of Andrew in front of Tower Bridge on the front.

The boy from West Bridgford who made such an impact on our party had several ministers at his memorial. Vince Cable was there, as were Lynne Featherstone and Sarah Teather. Deputy Leader Simon Hughes was there along with party President Tim Farron. Alistair Carmichael was brilliant at holding it all together as Master of Ceremonies, summing up our mood and saying that there could be no more fitting tribute in our Lib Dem family than Simon Hughes turning up early. Deputy Prime Minister Nick Clegg would have been there had he not been required in the House of Commons for the phone hacking statement.

Also there were virtually all the party's key campaigners over the last few decades - the likes of Candy Piercy, Paul Rainger, Neil Fawcett, Duncan Borrowman, Ed Fordham, Arnie Gibbons - friends I hadn't seen for years. It felt in many ways like my whole Lib Dem life was in that room.  Neil has today shared his memories of Andrew here.  Mark Cole has also done a superb post about the day here.

Director of Campaigns Hilary Stephenson paid tribute to the work Andrew did and talked about how he was always one to call a spade a shovel. She talked about the difficult circumstances we fought the Scottish elections in and how the prevailing mood music means that results don't always reflect professionalism and effort.

Fred Carver and Craig Ling shared funny and moving memories of Andrew, Fred particularly pointing out how much this guy is going to be missed.

Simon Hughes can always be relied upon to say exactly the right thing in these circumstances. None of us will ever be able to look at a picture of Tower Bridge again without thinking of Andrew. There was a picture of Andrew in front of that famous London landmark on the front of the order of service. It was a lovely photo, despite the angle meaning that he had a sort of Sontaran quality about him. Simon said that Andrew was like Tower Bridge - dependable, reliable, unique and iconic.

At Andrew's funeral 6 weeks ago, our emotions were raw and intense. All of us were pretty much being buffetted by shock waves then. Mike Moore, giving the eulogy that day, was absolutely perfect, making us cry and laugh with equal  intensity. Yesterday I felt like we really had a chance to celebrate his life. Don't get me wrong, I haven't cried my last tears over his loss by any stretch of the imagination, and everyone who knew and loved him misses him terribly, but yesterday was a vital opportunity to pay tribute to him. I'm so grateful to everyone who had a hand in setting it up. They are all kinds of awesome.

Another great thing about the Union Chapel is that it has a bar, which we all happily availed ourselves of after the service. I was particularly impressed that they had McGuigan Estate wine there - one of my favourites..

We stayed there for a while, and then Roger, Martin and Linda from Scottish party HQ and I headed over to the Houses of Parliament where we had been invited for dinner.

I may have worked for an MP for 4 years but had never, ever, in my whole life, visited Westminster, so this was very exciting for me. It was quite an awe inspiring experience to walk through Westminster Hall into Central Lobby and, after eating in the Strangers' Cafeteria, to spend some time on the Terrace. It was cool-ish and not always dry, but that relaxed couple of hours was exactly what we needed. I took some photos as night fell: 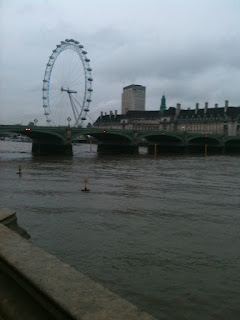 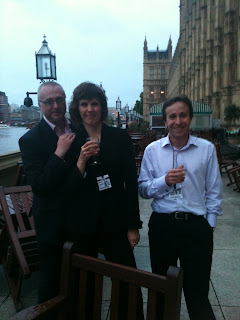 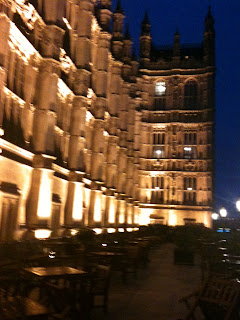 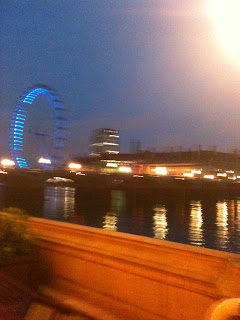 Then it was off to Euston to catch the sleeper home. It wasn't ready when we arrived so we went for a drink in the Britannia bar in the station. Owners of that establishment please note that it is not nice to see a mouse running around like it owned the place. Get it sorted, please.

I found the sleeper a lot more comfortable than I expected so I'm not as wrecked as anticipated today. I'm off to take children out to do exciting things now, but I'll leave you with the fabulous music choices from yesterday.