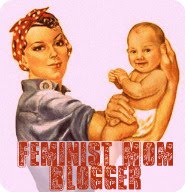 This is a really brief contribution to this week's Feminist Friday and it poses more questions than it resolves.

As mother of a 12 year old daughter, I have huge concerns about the pressures she'll be under in the next decade of her life. These years will see the greatest pressures on her to conform in terms of looks and attitudes to what an unforgivingly misogynistic culture expects.  Boys her age are already watching freely available internet pornography in which the women are portrayed as mere receptacles instead of equal partners. That is bound to affect their expectations of how relationships work.

I spoke to somebody who works with young women in this area, half hoping she'd tell me that I was worrying too much about this. She told me I wasn't.

I want for her to come out of the next decade a happy, confident woman with a clear idea of where she wants to go in life and how she can achieve that. I want her not to take any nonsense from anybody in relationships and to be able to recognise and expect healthy dynamics within them. I also want her to believe passionately in all women having the opportunities open to her.

I think it's important for all young people, boys and girls,  to know that, actually, many women in the world have much more to worry about than what they weigh, or how they look. There's a balance between scaring them and making them aware of the effects of a culture in which women are not treated as equals. Every day women, some not that much older than Anna is now,  are forced into marriage against their will, beaten, raped, systematically abused. Mutilation is a cultural norm in other places. Kids need to understand that there are huge restrictions on what women can do across the world.  Boys need to understand that the women in the pornography they watch online have no power in its creation and may be forced into participation after being trafficked. They need to know that for women without access to even basic medical care, a pregnancy is a potential death sentence.

There are so many cultural influence which seek to narrow the focus of teenagers to looks and relationships and pretty much nothing else. Raising awareness of the terrible injustices women face across the world is surely a win win, as it gives kids a different perspective on their own issues and will hopefully make them angry enough to do something lasting about it.

How do we engage more of our young people with these issues and ensure that they learn to appreciate the need for a society to value all sorts of equality and diversity? How do we cut through the crap that's bombarding them and let them see how others are forced to live.
Posted by Unknown at 4:04 pm

I think a lot of it is about education. Glasgow Women's Aid does training and outreach work and in S6 part of the SHRE curriculum in Glasgow there is a lesson on images in the media.

I think as a mother you can provide positive images and role models for your daughter and as a society we need to push for more education.

Isn't S6 a bit late, though? A lot of kids will leave in S4 and weren't Women's Aid dealing with the effects of abusive relationships among teens?