There are times when advertising and opportunism are completely inappropriate. In matters relating to someone's death, for example.

A series of tweets from Sky Sunrise presenter and all round cheeky chappie presenter type Eamonn Holmes showed brash insensitivity in the face of a tragedy.  It really wasn't the time to go advertising:

I mean, for heavens' sake, it's a tv news channel.  Of course it would be covering this tragic event. That did not need saying.

And he didn't react too well to criticism, either, when someone took him to task for it: 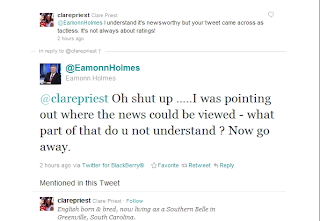 But, the thing is, if it was just a public service announcement, why then did he feel the need to have a go at the rival BBC?

That's just too much. I'm sorry, but there are some times when such blatant one-upmanship is completely out of order and I think Eamonn should apologise. He's rightly one of our most loved tv presenters and I've followed his career since the Open Air days in the 80s. I like the man and his cosy style, but he didn't do  himself any favours tonight and I'm really disappointed in him.

As if that weren't enough, the way Sky News and the Sun have covered the Norway crisis - with Kay Burley wondering what language people in Norway speak and the Sun deciding it was another 9/11 with the inference that Islamic extremists were responsible - has been absolutely appalling.

The suspect in the Norwegian atrocity had links to right wing groups. The whole right wing press in this country, while obviously distancing themselves from the odious extreme right might want to take a look at the way they report things. To say the least, they don't always portray those on benefits, or foreign nationals seeking to live in the UK in the best possible light.

The last few days has shown that elements of the Murdoch empire haven't found any scruples, despite their protestations to the contrary.
Posted by Unknown at 9:19 pm

Grow up or fuck off. You choose.

I commend you on your rational line of argument.

Grow up or fuck off? What does that even mean. If you're going to troll jonathan, try to make some sort of sense - it will make you seem less of an utter twat.

I have to say though, that I tuned in to BBC 24 at around 6 to try to get the latest news on the tragedy that is unfolding in Norway, to be treated to 3/4 hour of the death of a pop/jazz singer.

Now tragic though that may be for her family, and sad for her fans, it hardly ranks in the same category as some mad Christian fundamentalist gunman/bomber killing 85 children.

I'd suggest that the BBC needs to take a hard look at its priorities, unless it has decided to replace the news of the World at the lower end of the news market.

I don't know, there seems to have been a lot of misdirected anger over the past few days given Hacking/Norway/Amy and I think that's a little bit at play here to be honest Caron.

I don't really see what the problem is with Eamonn's 1st & 2nd tweets, though I do agree with you that the 'one-upmanship' over other news channels is particularly unseemly, given the context. It reminds me of a certain leading blogger down south being chuffed with his wee self about breaking the news of an MP dying first only to later have to admit that his facts were wrong and said MP was alive and well.

It's pretty sad if this is the direction that 24hour news/twitter/blogs is collectively taking us but, as I say at the start, I suspect anger should be almost wholly reserved for the real perpetrators of Oslo/hackgate, not cuddly Eamonn.

(And of the two options the charming first commenter offered you; I'd suggest doing neither. Imho, growing up is vastly overrated after all!)

Yes, I remember that leading blogger's embarrassing moment. To give him credit, though, he did grovellingly apologise for his mistake.

I think it's legitimate to be a bit annoyed with Eamonn over this without detracting from our very natural revulsion and anger at the perpetrators of the atrocity in Norway.

I think the second tweet, in which he takes Clare Priest to task, was a bit rude, to be honest.

Tris, I think Amy's death was a newsworthy event which deserved coverage. However, I was disappointed with some of the nature of the BBC's coverage. You could take as read that people visiting the home of someone just found dead are going to be upset - you don't need a BBC reporter giving all the intrusive gory details.