Willie Rennie: what the journalists say 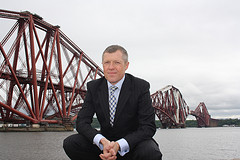 It's hard to believe that it's only nine short weeks since Willie Rennie announced he was standing for the leadership of the Scottish Liberal Democrats. He has made quite an impact since he took over, acquiring positive comments and coverage across the media.

Here's a selection of comments made about him in the press. Links are included where the article is available online.

A doughty campaigner, with an unpatronising down-to-earth style, Mr Rennie may grow into an impressive leader, building a level of credibility... The Herald

Amid what was... a general air of gloom, there was one bright spark.  This was the performance of Willie Rennie, the new leader of the much depleted Liberal Democrats, whose brief sojourn in the Commons seems to have at least taught him how to frame decent questions, on this occasion about Mr MacAskill's outrageous behaviour."  Alan Cochrane, Daily Telegraph (not a known fan of the Liberal Democrats, to put it mildly)

"The former Scottish Lib Dem chief executive has made a decent start and showed he wasn't afraid to throw a punch"  Andrew Whitaker, Scotsman

"Mr Rennie looks like he won't back away from Mr Salmond during parliamentary debates".
"Mr Rennie looks and sounds like a good Holyrood performer and is probably one of his party's A-listers." Scotsman

"Willie Rennie...gave a good account of himself, and his trenchant questions finally roused the SNP back benches - stunned by the Salmond soliloquy - to something approaching anger.  And how we needed it." Times

"Lib Dem leader Willie Rennie yesterday accused the SNP of an 'anywhere but London' attitude to governing the country.  He said: 'This is more about Anglophobia than Scottish nationalism.'" Daily Mail

"Willie Rennie is in place for the Liberal Democrats, compensating rather effectively for lack of numbers with high-energy endeavour." Brian Taylor, BBC


Part of the reason it seems longer than 9 weeks since Willie took over is because he's had a huge amount of coverage on the wide range of issues he's spoken out on. Again, here's a selection of the best.


Did the First Minister raise the issue of phone-hacking with Mr Murdoch at the meeting, Scottish Lib Dem leader Willie Rennie wants to know. Or was the subject of the chat more about how to persuade the media giant to put its elbow to the SNP wheel? The answers are unlikely to be overly detailed from the SNP.


The Daily Record doesn't make a habit of writing about the Scottish Liberal Democrats, but they reported Willie's concerns on the implications of independence for university funding.


INDEPENDENCE would cost Scottish universities £31million a year, Lib Dem leader Willie Rennie has warned.
Nearly 20,000 students from the rest of Britain pay up to £1820 to attend Scottish universities.
But if Scotland became independent, they would be treated like other European students who do not have to pay to study in Scotland.
Rennie, who became Scottish Lib Dem leader after Tavish Scott's resignation last month, said: "This is another example of the SNP's total lack of clarity on the real cost of Scottish independence.


The new leader of the Scottish Liberal Democrats has signalled a policy u-turn on the introduction of a minimum unit price for alcohol.

Willie Rennie said the plan, opposed by his party in the last parliament, was necessary to fight Scotland's unhealthy relationship with drink.
He plans to seek the support of party members at the next Scottish Liberal Democrat party conference.
The Press and Journal covers Willie's comments on the Supreme Court controversy:


The LibDem leader said the SNP’s Holyrood majority had changed the political landscape. “Before it was all theoretical. Now independence is a real possibility. The figures on [support for] independence are moving up. It could really happen,” he said. “Because Alex Salmond is crafty, he may well get people over the edge before they know it. 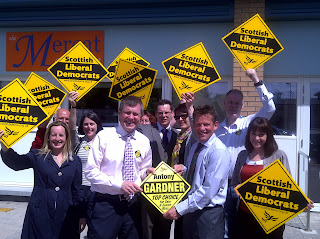 And as well as all that, Willie has made a huge effort to meet as many Scottish Liberal Democrats as possible, from all over the country. From the Highlands to Inverclyde, he's been campaigning in by-elections and when I spoke to him after one meeting with local activists in Paisley, it was clear he was thoroughly enjoying getting out there and getting to know the members.


It was noted that at the Members' Forum last month in Edinburgh, he sat all day taking notes and his speech at the end referred to and answered what people had been saying. He told me the day he was elected as leader that he wanted to listen to members and it's clear he's putting that into practice.


It's clear that Willie has impressed in his first 9 weeks. We have a lot to do in the run up to the Council elections next year, but we can be assured that our leader is going to be working energetically, boldly and imaginatively alongside us.
Posted by Unknown at 12:03 pm

Huh: no surprise that arch unionista and failed Fife MP Rennie gets and easy ride from the pro UK press corps. His performance at FMQ, however, is I see not so quoted. How many questions has he asked in those nine weeks? And why no clips of his stunning ripostes to Alex? One more I’m afraid to say yet another insipid piece of unthinking sycophancy.

Willie of course can indulge in saying any buzz-word or soundbite he likes in the sure fire knowledge that nowadays not even the Labour party would invite him into a coalition. And of course the pro union press just lap that up; and it’s a win win situation as Willie will never have to actually aherm...govern! Instead of just blowing off for the benefit of the Lib Dems and in particular Willie Rennie maybe he would do better to actually sit down and discuss the problems facing this country rather than courting headlines and column inches.

Willie Rennie: what the journalists say

They must of hacked your voicemail!:-)