If they gave Olympic medals for falling asleep in front of the television, my Dad would have a bucketload. That explains why, completely independently and 150 miles apart, my sister and I both bought him the same Father's Day card. It depicted a man lying on the sofa with the caption "Dad was an expert at watching tv with his eyes closed". Certainly once I'd seen that card, no other would do. Nevertheless as we set off to visit my parents this afternoon, I rather apprehensively hoped that the bottle of Remy Martin would be enough to atone for my cheek. I burst out laughing when I saw my sister's identical card already on the mantelpiece.

I should add that if they gave out Olympic medals for being lovely, kind, hilarious, wise and brave, he'd have a fair old haul of them too.

The other dad in my life is, of course, Bob. He is such a brilliant dad to Anna. The bond between them was sealed when, less than an hour old, she grabbed hold of his finger and wouldn't let go. He brings the creativity and originality that she so desperately needs and I lack to the parenting table. He takes her on adventures. The Summer I was ill with Glandular Fever, he presented her with a box with 50 or so cards, each depicting an activity, for the Summer holidays.her challenge was to use them all within the 7 weeks. Some she was literally able to cash in because they were for things she wouldn't like, such as going to the burial site at Cairnpapple Hill. She was paid for doing them! They had a whale of a time.

For her birthday this year, it was his idea to get her an underage driving lesson as he had learned with his mother on the disused airfields in Easter Ross as soon as his feet could reach the pedals.

I am incredibly lucky, too, that we agreed on how we wanted to bring her up. He unquestioningly supported my hippy, attachment parenting ideas. I could not have wished for a better companion on the parenting journey and I'm incredibly grateful for that.

I recognise how lucky Anna and I are to have our Dads around. My Facebook and Twitter feeds are full of loving messages from friends who are missing their dads. I'm thinking of them tonight. 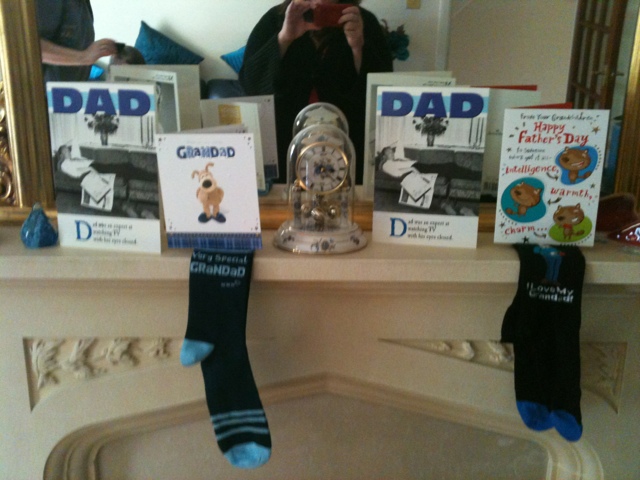