SNP is putting self interest before human rights - Rennie #dontpandatoChina 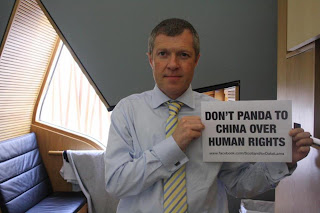 First Minister Alex Salmond loves to meet international dignitaries and world leaders. Every chance he gets, he's off playing a larger than life role on the international stage. Just last weekend, he was in Los Angeles promoting Scottish business and schmoozing with celebrities at  a film premiere.  It's all the more surprising, then, that he can't find a space in his diary to meet the Dalai Lama when he visits Scotland this week. This is in stark contrast to the reception the exiled Tibetan Spiritual Leader received in 2004 when he addressed the Parliament and met the then First Minister and other party leaders. Just today, the Dalai Lama has addressed a meeting in the Westminster Parliament. David Cameron and Nick Clegg are away at the G20 and Rio+20 but they met him last month and just put up with the inevitable strop from the Chinese Government.

Could it be that Salmond's discourtesy has something to do with a visit he  received at Bute House two weeks ago from the Chinese Consul-General as reported in The Times (£). We know from reports in the Independent and the Courier  that the Chinese authorities have been visiting local councils from Leeds to Inverness  to discuss their involvement in the Dalai Lama's visit. Only SNP-run Dundee City Council and the First Minister seem to have taken any notice of them. The Lord Provost has apparently suffered a bereavement and is unable to attend the Dalai Lama's event, but the Council has thus far failed to provide a replacement speaker.

On behalf of Scotland, I want my First Minister to offer honour and succour and support to a man who leads his people, in exile, through a very real and terrible destruction of their way of life by a supposed neighbour nation. He does it, also, by advocating non-violence. He should be respected and supported by the SNP, as much, if not more than, anybody else. He is a true fighter for freedom. So why the cold shoulder?

Scottish Liberal Democrat leader Willie Rennie has urged Alex Salmond and Dundee City Council to meet the Dalai Lama and not to pander to the Chinese authorities.

This is a missed opportunity. By failing to meet with the globally respected spiritual leader and Nobel Peace Prize Laureate the First Minister may leave the impression that he is more concerned with pandering to the diktat of the Chinese government than promoting human rights. We ignore China’s human rights record at our peril. I appreciate that China would be sensitive about such a meeting but the First Minister should stand up for what’s important.
Last week we saw the First Minister continue to defend Mr Murdoch’s Empire. This week we are seeing his obsession with powerful people continue.
Dundee City Council need to speak at and fully support the event or we will conclude they have been nobbled by the Chinese government. The SNP have put their interests above human rights.

Amnesty Scotland have said that " it seems that economics trump human rights when it comes to Scotland's growing relationship with the world's second largest economy."

A Facebook page has been set up for those who want to urge the Scottish Government to officially welcome the Dalai Lama and you can also tweet your views using the hashtag #dontpandatoChina which refers to the two pandas currently on loan to Edinburgh Zoo from China.

It seems strange that Alex Salmond, who will be in Scotland while the Dalai Lama is visiting, cannot find the time to meet him. Scotland prides itself on being country committed to democracy and human rights and we expect our First Minister to reflect those values.
Posted by Unknown at 7:00 pm

What UK minister is meeting the Dalai Lama?

Cameron & Clehh met him last month so he's had the highest courtesy from the UK Government.

Cynical Highlander, so what? Even forgetting Caron's rather 'in-your-face' response, this aint about Salmond and Dundee SNP. You know, people who say they're better than that.

I find it deeply shameful to Scotland that not one Scottish Government minister could meet the Dalai Lama.

Where does it put the sentiment that a new Scottish politics, post independence, would be morally superior to Westminster's nest of hypocrisy.

I'm not shocked at the Firstminster. His lack of ethics have long been tainted by his lust for power.

I'm shocked at the SNP in general.

For such a broad church, why is there no dissension?

What are they going to sell out next?