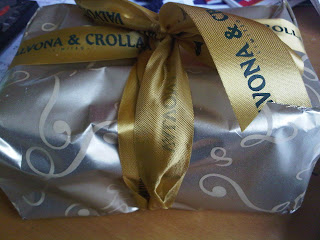 Yes, I know it's all commercialised hype, but it does keep people in jobs, which has to be a good thing, especially at the moment.

I'm having a lovely relaxed day so far. I am a very understanding wife - I didn't mine when my husband put aside my card to open after he'd finished on his Facebook farm. That's nothing compared to the inconvenience and disruption the Liberal Democrats have caused to his life over the last 23 years so I can't really complain.

I certainly have nothing to complain about when I look at the rather beautiful(or, alternatively, rather beautifully wrapped, then unwrapped and cack-handedly re-wrapped so I could take a photo) box of Valvona and Crolla chocolates he bought me along with a lovely card. In return, I've downloaded some weird music for him, bought him a DJ magazine and more chocolate, this time dark, with chilli, dark with ginger and milk with pistachio.

The day so far has also contained some geekery - I'm trying to get to grips with Google Buzz. If you want to follow me, put in the blog's e-mail address, caronsmusings@gmail.com and you should be able to find me.

So far, I'm not convinced it'll do much more than Twitter. I like the ability to thread conversations so you're not darting here, there and everywhere trying to keep up if there's been a time delay, but it's by its nature closed and Twitter seems more accessible to more people.

I'm now off to go to the supermarket to get the wherewithal to make one of my favourite desserts of all time, which I haven't done for ages - Queen of Puddings, following the infallible Delia Smith recipe. See you later!
Posted by Unknown at 11:15 am