Well, it doesn't seem like a whole load happened on Thursday 28th June 1951. Not on the face of it anyway.

In the US, a highly dubious show, Amos 'n' Andy, which drew protests from the NAACP aired for the first time on  TV.

In the UK, a baby called Sarah Ward, who would adopt the stage name Lalla and  play Romana in Doctor Who and marry Tom Baker, was born. Here she is with some daleks and Noel Edmonds. Which is scarier?

In the House of Commons, an MP for Sheffield Hallam, Roland Jennings, who fought as a Conservative-Liberal, took the Minister to task on ID cards. There's a certain irony, of course, because Nick Clegg, the Deputy PM, now represents Hallam and one of the things he said at the time was that he would go to prison rather than carry an ID card. Interestingly, Jennings was once the MP for Sedgefield, later represented by the one the Elephant calls Lord Blairimort himself.

But this was one of the most significant days of my life. Even though I didn't make my entrance into the world for another 16 years. Because, in a nursing home which is now a holiday park near St Andrews, a very cute baby boy was born. 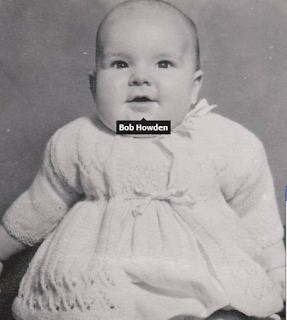 You see, this sweet baby became a lovely man. 24 years ago today he decided to go for a birthday walk in the mountains around Braemar with some colleagues. They all went back to work the next day, but he was on holiday so he stayed at Braemar Youth Hostel. He'd only planned a night, but ended up staying a week and a half and leaving with a lot more than he bargained for.  If you want to know more, read  The Lure of Lentil Gunge - or how the Bob was won.

He has been an absolutely brilliant husband for all of these years - and anyone who takes on a Liberal Democrat activist takes on the party as well - and plays second fiddle to it on many occasions. I am a fairly crap wife, to be honest, certainly missing the domestic, home-making gene, but it seems to work......

I may have bought him coffee called Grumpy Mule this morning as a joke, but in reality he is lovely and he makes my life happy and full of laughter. Well, most of the time. He's making full use of this special birthday to  tease Anna and I to the max this morning. I've already been threatened with a gag - and I just have to let him away with it (the joke, not the actual gag, of course).

He's using his birthday to finally embrace the 21st century. We're off to get him a new mobile phone and then go out for lunch.

Later, it's Wagamama for dinner and then Anna's primary school graduation. And there may be some more presents too...............

So, with a little help from my friend Elspeth - can you recognise the font from every glossy Lib Dem leaflet you've ever had in your life............ 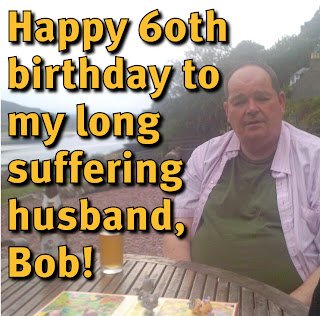 And although he does look very long and very suffering in this, it was taken on the last night of our holidays last year and he was actually quite relaxed.
Posted by Unknown at 10:16 am

Wish him a happy one!