Over the past couple of years, I've got to know Keris Stainton on Twitter through my F1, chocolate and book loving friend Kate who introduced us because of our mutual love of Strictly Come Dancing.  I later realised that she writes books for young adults and she's recently had her second book, Jessie Hearts NYC, published. I started to read this on Aberdour beach last week, but Anna swiped it and wouldn't give it back until she'd finished it. She absolutely loved it.

By the time I finished it yesterday morning, I had quite a rosy glow of contentment. Enjoyment of the book starts with Mike Lemanski's gorgeously eye-catching cover. I would never be able to resist a book with the Chrysler Building, my favourite building on the planet, on its spine. 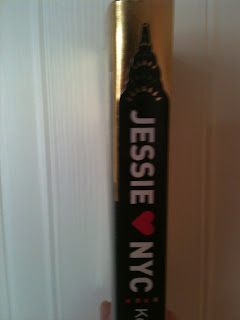 It's gold, shiny and makes you want to read it - not to mention the competition to win a trip to New York....although you can just enter that here...... 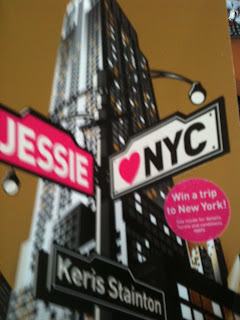 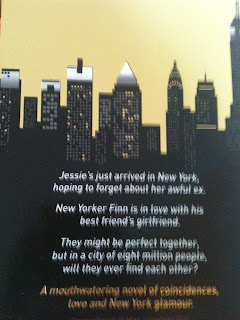 Whether you have been to New York or not, you will fall in love with the city which provides the backdrop for the story. You'll recognise the movie and tv locations - although the one glaring omission for me was the cafe in Serendipity.  Anna's never really shown much interest in New York before but she will now be a very useful ally to have in constructing future holiday plans.

I went to New York City for a long weekend in December 1994 and have been wanting to go back ever since.  This book had me googling places I hadn't seen, like Strand bookstore (18 miles of books. Heaven) and The View restaurant. Although I suspect the Campbell Hotel is either so exclusive as to not bother with something as common as the internet or made up, as the only one I can find is in Tulsa.

The story itself follows Jessie, a girl from Manchester off to spend the Summer with her playwright mum who lives in New York, and Finn, an 18 year old native New Yorker deciding what to do with his life. The story switches between their two points of view in a way that's insightful and sometimes comedic. Keris' key strength in both her debut novel Della says OMG and Jessie is a very prescient understanding of what goes on in the heads of teenagers which comes across in her likeable, rounded characters. I saw bits of myself in Natalie, Jessie's mum, which made me feel slightly uncomfortable. Anna noticed the same things, but they seemed to make her laugh rather than traumatise her, so no harm done, I guess.

Themes from both books include a perfectly healthy interest in delicatessens - her books certainly march on their stomachs.

I like her lively, funny dialogue too - although is the odd instance where the New York characters say things in a distinctly English vernacular. You should also know that I found a typo. You know how irate they make me, but the book had chilled me out so much, I reacted with just an affectionate tut. That has to be a good sign.

This story is perfect Summer reading, sweet without being schmaltzy, authentic and funny. Once you start reading, you really don't want to put it down. It covers themes of parental expectation, conflicting loyalties to separated parents, and early love and relationships. It struck me that maybe part of the reason the story draws you in is that Keris is writing not only about young love involving her characters, but about one of her first loves, for New York City.  It's one of these books that's just good for the soul.

It's part of the buy one get one half price promotion in WH Smith's at the moment, so grab it while you can and read it on holiday.
Posted by Unknown at 11:54 am