The opening of the National Museum of Scotland in pictures 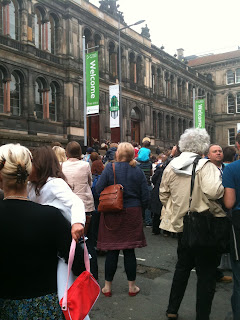 This morning the National Museum of Scotland re-opened its doors after a refit that's taken more than 3 year and cost £47 million. Anna and I went along - although we couldn't stay for too long as she had her final Glee Week workshop to get to.

The Museum was one of our favourite places to visit - a real treasure trove for an inquisitive mind. We've really missed this part of it. Anna's never been as absorbed by the exhibitions in the new building.

When we arrived in Chambers Street around 9:30, there was already a fair sized crowd. Unfortunately, we were too late for the animatronic dinosaur and acquatic dancing creatures, but who needs them when you can have Grant Stott? He was dressed in a frock coat, and my first thought was that it was like pantomime come early. For those of you who aren't based in Edinburgh, Grant is a DJ on Radio Forth and a perennial star of the pantomime at the King's Theatre. He introduced us to 11 year old Briony who recounted that she'd taken her first steps in the museum. 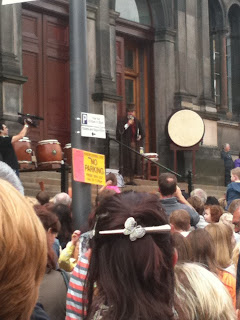 We were quite alarmed to see the lengths some people went to go get a decent view of the proceedings: 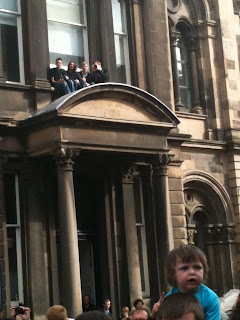 But they weren't as high up as this guy. And look - he's going to jump! 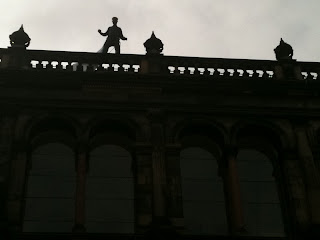 And off he went! 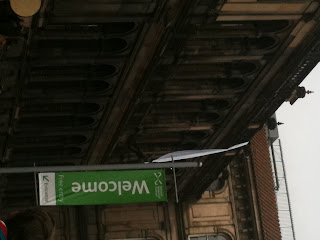 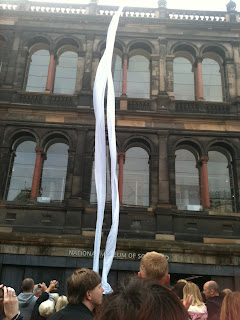 As they reached the bottom to a fanfare played on a 2000 year old horn, there was an almighty noise. I'm not really up on pyrotechnics but I guessed they were firecrackers. Lots of them. It was very noisy and a little bit glittery.

We were then allowed in. Not the old way, through the famous wooden doors,but into stone lined basement. 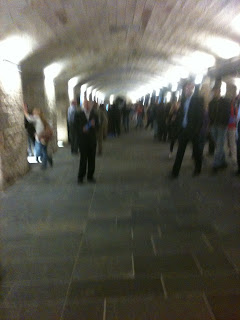 We then went upstairs to what used to be the entrance hall. 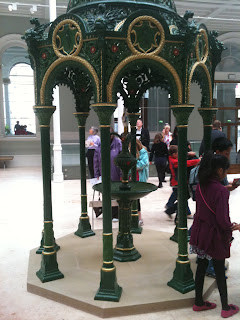 They had some random exhibits there. I am not usually very good with my technical things, but I was quite pleased with myself for correctly identifying this as a printing press: 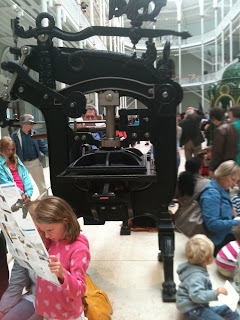 Anna was taken by the Communications display. I was completely and utterly freaked out by it. I just don't think I'm old enough to see inventions from my adulthood, like the earliest mobile phones, appear in a museum. The thing that really made me sit up and think was that Anna had absolutely no idea how to work a dial phone. I had to show her. 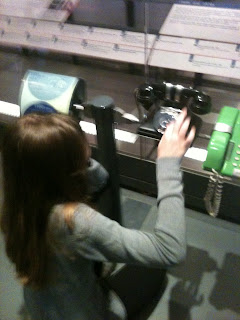 I was a little disappointed that they seemed to have every phone known to man on display except the standard issue BT phone of the late 70s and 80s. How I desperately wanted one of them with its proper ring that sounded like a proper bell. I hated the fact that we had one of these horrible trim phones at home: 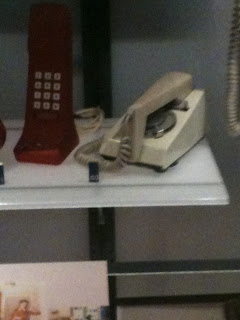 Anna thought it was creepy before I told her how much I loathed it. Good girl.

My favourite photo of the whole day has to be this view from the top. 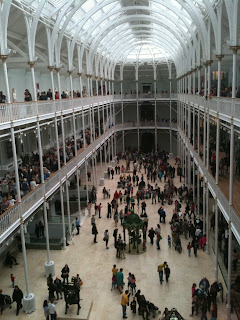 Now, I have been told that I shouldn't mention goldfish. I, however, don't see any harm a little piscine nostalgia. There was much consternation when it was announced that the goldfish ponds which used to be in the main entrance hall were not going to survive the refit. I will admit that we were sad to be them go but this new hall just looks fantastic. It's all kind of light and airy and Great Exhibition like. If it were filled with people in Victorian dress, they wouldn't look out of place.

When we saw this, I thought that it was so good that my sister wasn't doing her Land's End to John O'Groats charity cycle ride in Victorian times. A modern road bike may not be the most comfortable way to travel, but it's better than this old boneshaker. 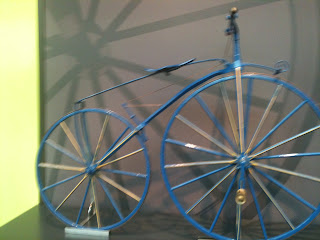 There was another moment of slight discomfiture as I saw computers invented within my lifetime displayed - this time compared with the modern iPad - in which you can see my leg reflected. 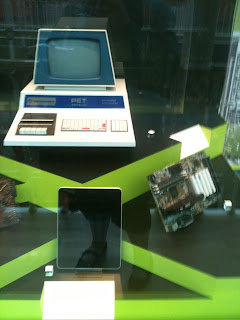 The final photo looks down on the Stewart Ford F1 car. 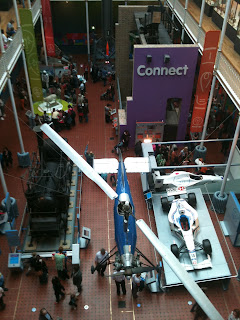 I know that these barely scratch the surface. We saw but were didn't have time to take a picture of the shiny new escalator. There are also better quality snaps around than my iPhone, with the best will in the world, can manage. I hope you've enjoyed our perspective, though. You can have a look at some more professionally done pictures on the National Museum of Scotland's Facebook page.

I'm so glad we were there for the first day, even if we did have to rush off. We'll be back soon - and often.
Posted by Unknown at 3:26 pm

Have to get back now that they have reopened the old part of the building and see just what is on display.

Wow! I definitely love that phone, it's quite vintage, eh, and a very good collection.

Thanks for sharing,
Mizpahlouise@medical products

Can't believe that I missed this when you posted it... Think I had seen it and meant to come back to it when I had more time!

Anyway, good to see the pictures - I'm really looking forward to getting back and seeing it. I hope I have time at Christmas to squeeze it in!