First Scotrail takes mickey out of its customers

Picture the scene. A platform full of dedicated souls, waiting for half an hour in sub zero temperatures hoping for a train. They'd struggled through two feet of snow to get there. If you don't believe me, have a look at my back garden - the top of that fence is my hip height. 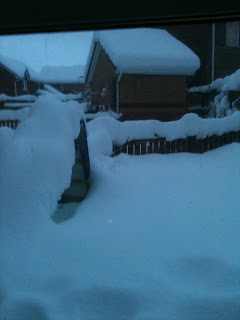 So, over the tannoys comes the announcement that all services to Edinburgh are suspended. With an air of resignation, people start the trudge home.

Just as they get to the other side of the station, a train appears, going to Edinburgh. The conductor screams at people that he's not waiting for them, and they're to run (across the snow and ice) if they want to catch it. Only a handful managed it.

What a complete and utter farce! I know perfectly well that First Scotrail aren't miracle workers, but to put a message out on a tannoy that there were no trains when the train must have been on its way from Bathgate is an absolute disgrace. They seem to fail at the most basic level of communication as I wrote the other day. Mind you that involved shunting people around the station and back again so maybe this is the "Grand Old Duke of York" style of people management.

The attitude of the company towards its passengers may well have been revealed by a conversation between my husband and one of their employees, waiting for their (free) transport to work. This person, when Bob made the usual commuter grumbles, said that it was typical of people who normally took the car in but used the trains in these conditions, to moan. Bob told them straight that he'd been taking that service for the past ten and a half years.

There is something seriously wrong with the culture in First Scotrail.  They need to sort their attitude out.
Posted by Unknown at 8:57 am

But to be fair, the tannoy announcement would have been made by someone sitting in the service centre (Dunfermline?) and on instructions to make such an announcement. Those in that centre may not be aware a train is actually running on route at that specific time.
As for the platform-obics, that's something North Berwick commuters suffered from regulary during evening rush hour.