Santa Claus and the Purple Glitter 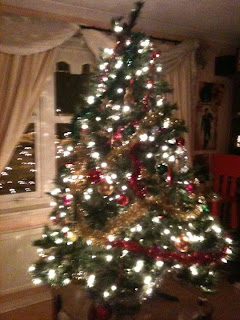 Anna was delighted this morning to find a letter, on the thickest, most luxurious parchment from the man himself, Santa Claus. He certainly seemed to know a lot about her, so it's comforting to know that the naughty and nice list is evidence based.

It appears that there's been a bit of a calamity with a couple of her presents, which came a bit of a cropper after the elf carrying them to the sleigh slipped on a slide made by some over enthusiastic baby penguins and landed in some fresh reindeer poo.

He also asked her, as she's particularly interested in animals, to add extra purple glitter to the reindeer food as this keeps them warm. We always add several different colours - blue for hydration, green for speed, gold for altitude, silver for contentment and red to keep them, err, regular. So we spent some time getting the proportions right and it's all ready to put out for them tonight. When I first read of the request for purple, I wondered if the reindeer were supporting the Yes to AV campaign. I probably need to get a life. 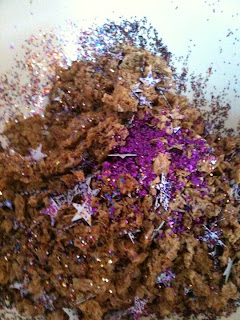 Apart from Bob, who, bless him, has been doing battle with the supermarkets again, we're having a very relaxed Christmas Eve. When I was a little girl, it was always a frantic day, when everyone was grumpy because everything had to be clean for Christmas Day. I tend to favour the more slovenly approach, which I prefer to describe as relaxed  - no surprise there - so having spent the morning snuggled up with Anna watching the Santa Clause 2, I am now at the laptop with a bottle of alcoholic ginger beer at my side.

I watched the first Santa Clause movie yesterday, when I didn't even have the excuse of a snuggly child. It seemed ironic to me that it occupied the same slot as First Minister's Questions at Holyrood. Don't get me wrong, these films are dire, but just for this overly sentimental couple of days, they set the right tone.

So, the rest of the day involves some light baking - mince pies, with puff pastry and cheese and then dinner, Nigella's fish gratin and green vegetables with a nice bottle of M & S white grenache. There will inevitably be the QI Christmas Special, which Anna couldn't miss, but she knows that she'll have to get to her bed straight after. If I can't convince her, Norad will. The US military has its uses.

It was good to get an early Christmas present first thing - the Clifton Terrace One, Andrew Reeves, has been freed from Twitter Jail in time for the big day. That took some doing and many e-mails back and forth.

Up until a few minutes ago, it looked like, despite having had loads of snow for four weeks, we might not count as having a white Christmas as none was forecast to fall on Christmas Day. My very helpful local councillor has just sent me the latest weather update which is forecasting some overnight.

And now a couple of wee festive gems for you. Stephen posted this last Friday and I think it's fantastically funny, although I had to explain some of it to my husband. I thought I'd share it with you.

And Kelvin, as ever, one of the wisest people I know, has some typically sensible words for those who are single at Christmas.

As for my blogging, it'll be lighter and more whimsical for the rest of the year. Thank you to everybody who reads and comments, even those who tear me to pieces.

Wherever you are and whatever you're doing when you read this, it comes with my good wishes that you have a peaceful and contented festive period.
Posted by Unknown at 3:30 pm

I trust Santa kept his promises this year! (so clearly not a Lib Dem, etc. etc.).

A Merry Christmas and a Happy New Year to you and your family.

Thanks for sharing the secret of the colour of the glitter.