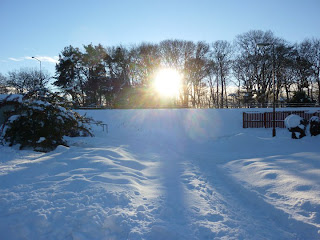 I have been really impressed with the way West Lothian Council has kept in touch with people over the last week, since Snowmageddon hit.

I particularly want to highlight their helpline for vulnerable people, 01506 773440. This is what they've written about it on their Facebook page:

We are extremely concerned that there may be very vulnerable people in the community who may need urgent support. A special helpline 01506 773440 to deal solely with enquires for help from people who are frail, vulnerable or severely disabled and who have no other support. Staff from across the council have volunteered to make contact with people who need essential provisions or prescriptions. Please share this info.

I'm sure that people living in places like the Yorkshire Dales or Aberdeenshire will have seen conditions as bad as these before, but I don't remember ever having 23 inches of snow in my garden - and yes we've actually measured it. Like last Winter, I really appreciate the challenges faced by those who are working round the clock to try and get the routes clear. They seem to have been able to clear more residential estates more quickly than last year - although they've not yet been near mine.

As well as its own website with a dedicated snow page, the Council has been using social media. I don't know if Elaine Henderson, whose name is on the @lovewestlothian Twitter account is a real person with that name, or a generic made up name to make it more personal, but whoever she is, she's been marvellous all week, working long hours to give information not just about Council services but community events. Although they say that they can't reply to invididual queries on their Facebook page, it's clear from subsequent posts that they read what people are writing and respond accordingly. Apparently they've had praise for their "gritter twitter" on this Communities of Practice for public service website, but I'm not a member so I can't verify it.

What's been particularly good is that decisions on school closures have been made and put out there in good time. They'd decided by 12 noon on Wednesday to close for the rest of the week, giving parents time to sort their arrangements out. On Monday and Tuesday, the decisions about the next day were made by 4pm.  All the schools have been closed all week, a decision I wholeheartedly agree with. Blanket school closures took a bit of stick from Annabel Goldie at FMQs on Thursday, but I really can't imagine anywhere in West Lothian where it would have been safe enough to send the kids to school. We had 20-25cm falling during each night. There was no way on earth the routes to school could have been cleared by 8am with the equipment they had. There's definitely an argument that the head teachers have to be involved in the decision making process, but surely the Council knows what it can get done in terms of clearing routes across the whole patch. I think what I'm saying is that there needs to be some common sense in the process.

We still don't know if the schools will re-open on Monday. I'm sure they'll do all they can to ensure that they do, but ultimately it's the kids' safety that's most important. I certainly wouldn't have wanted to walk 5 year olds through 2 feet of snow when the roads were impassable - they would have been soaking wet by the time they got to school. My radiators have been stacked with several pairs of drying trousers every day from my tall 11 year old.

No doubt there will be reviews of decisions and services, but as a punter, I'm happy that they've kept us informed. Maybe the appalling First ScotRail could take a leaf out of their book.
Posted by Unknown at 10:52 am