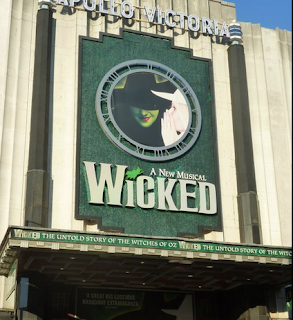 Three years ago, there was a tv show called I'd do Anything, one of these reality talent shows which picked a Nancy for the new Oliver musical in London's West End. One week, contestant Samantha Barks sang Defying Gravity from Wicked and went to a masterclass with one of the stars of the original Broadway production, Idina Menzel. That song has now become one of my favourite of all time, and I have become increasingly obsessed with the musical which, as the composer says tells "the untold story of the witches of Oz".

In it we find that the good witch is maybe not quite as good and the wicked witch is not really terribly wicked at all. The music, which I quickly acquired, is dramatic, emotional and beautiful. I could never tire of listening to it. I'm not alone either, given that a couple of days after our visit, Brad Pitt and Angelina Jolie took their kids to see the show.

Anna shares my Wicked obsession and the main reason for our recent trip to London was to see the West End production.  It was the first London show for either of us. We went along with the Divine Ms Duffett and her daughter. We met at Victoria on a boiling hot evening and went for a quick bite to eat at Pizza Express. Pink Dog would have been proud.  Like true bloggers, we sat there at the dinner table with our iPads while our daughters raised eyebrows at us. At least they realised that their mum wasn't the only one.

Bob would rather be boiled in oil than watch a musical, or at least this musical, so he was given free rein to explore London for the evening. I even lent him my iPhone, which I never usually let out of my sight, as his phone was broken. He ended up drinking wine and reading his book in Victoria Station, across the road from the theatre.

I am clearly not very good at reading a theatre map because I was surprised at how good our seats were: 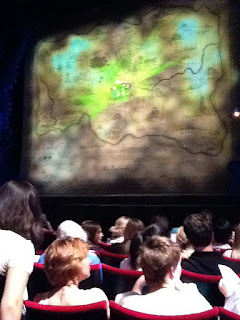 We couldn't quite see the whites of the actors' eyes, but it wasn't far off.

Above our heads was this beastie: 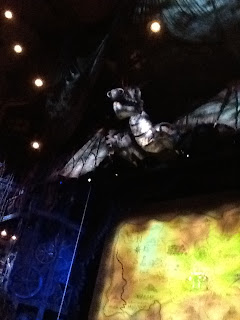 When you look forward to something as much as we looked forward to this, it can be disappointing. Not a bit of it. Elphaba, who becomes the green Wicked Witch of the West, was played by Rachel Tucker, who, ironically lost out to Samantha Barks in the semi final of I'd do Anything. Her performance was absolutely stunning. She totally captured the essence of that unsure, idealistic girl who heads off to Shiz university and finds herself sharing with the unbearably vacuous, spoilt Galinda.

Elphaba and Galinda eventually become the unlikeliest of friends. Elphaba instinctively fights for the rights of their teacher Professor Dillemond as there are moves afoot to prevent animals teaching. There's a powerful human rights message.

Elphaba thinks the Wizard can not only sort out this injustice, but help her out personally as she's always been self conscious about being green.

When she's sorely disappointed, she takes off, for the western sky, dramatically rising from the stage, brandishing her broom, to fight the wizard.

Oz's Daily Mail equivalent, headed up by the Wizard's spin doctor Madame Morrible (who reminded me of Melanie Phillips) soon has her trashed and demonised as events are wilfully misinterpreted and myths spread about her wickedness. Galinda, now known as Glinda, chose to stay, but secretly continues her friendship with Elphaba.

Tucker's portrayal showed how her character grew in confidence and courage, seeing her destiny as an outcast and taking it. The most heartbreaking line in the whole play is "I don't want it.....I can't want it any more" in Defying Gravity and she captured the last vestige of inner conflict with great sensitivity. She made the audience warm to her and her searing performance of "No Good Deed" captured her heartbreak at that point in the show. Her supreme acting skills were always her key strength in the tv show, and these were very much in evidence, but her singing voice blew us away.

Glinda was played by the stand-in Chloe Taylor as regular cast member Louise Dearman was absent. Her voice isn't quite as strong as Tucker's, but she made up for it in having exactly the right amount of vanity and sass. Having seen bits of Dearman's portrayal on You Tube, I think that Taylor captured the essence of the character much better. Her comic timing,  in Popular especially, was brilliant.

Taylor and Tucker work well together on stage, whether their characters loved or loathed each other. Another highlight of the show was "What is this feeling?" when they sing about their "unadulterated loathing" of each other in the early days.

The costumes indicate that Oz really is like nowhere on earth. Strange colour clashes and styles jar a little bit. Glinda's girly ballgowns look a little out of place but contrast well with Elphaba's stark outfits. And as for footwear. Oh dear. This show needs Carrie Bradshaw from Sex and the City and fast. The only decent pair of shoes in the entire thing is conjured up by Elphaba!

This show has everything - a love story, a bit of drama and politics - let's be honest, Elphaba is a Lib Dem - and the thing I like most is that it has strong, female characters who take control of their own destinies. In their own way, they stand up for what they believe to be right.

More than anything else, looking over at Anna and seeing her totally spellbound face made all the stress of being in a  superheated London and the trials of the Dodgy Lodge, totally worth while. She said that the day, which began with Doctor Who and ended with Wicked, was the "best ever."
Posted by Unknown at 1:56 pm

Email ThisBlogThis!Share to TwitterShare to FacebookShare to Pinterest
Labels: Caron in London, Wicked