Well, Lib Dem Councillors in Edinburgh needed a good kick up the rear...... 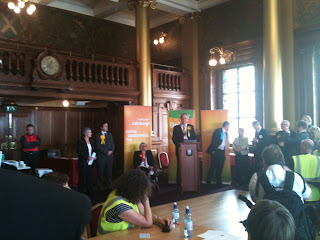 We tackled the dire budget situation with a “budget grip” exercise to ensure all Directors were properly controlling and monitoring departmental spend, made record efficiency savings and have restored reserves each year.

We have reinvigorated the economic development of the city; made the case to the Scottish Government for a Capital City Supplement grant; have set up an Economic Action Resilience Network to help alleviate the impact of the recession; and are about to start a pilot Tax Increment Finance scheme to kick-start our Waterfront development.

We have transformed care for the elderly and vulnerable with three new care homes and fourth underway but, most importantly, with our Re-ablement Scheme, which maximises the capability, dignity and independence of those who need care at home.

We have improved opportunities for our children, upping levels of attainment in schools, and taken tough decisions to close primary schools to give better schooling to more children.

We have started the first council house building for decades; and the inspection by the Scottish Housing Regulator in March 2010 awarded us “AAB” grading, the best in Scotland to date.

Despite hysterical critics (including our coalition partners), and an extraordinarily difficult relationship with a contractor, we have held our nerve on progressing a tram system for Edinburgh to give us the sustainable, modern public transport we need in future years.

We have encouraged recycling to its highest ever rate, extended garden waste collection, and improved street cleanliness.

We have made Edinburgh safer through excellent partnership working with police and fire services.

Finally, we are delighted that our efforts have helped Edinburgh win a huge range of accolades over the last couple of years, including FDi magazine’s European “Best Small City of the Future” and “Best Small City for economic Potential”; Conde Nast’s Favourite UK city; Top Global Festival & Event City in its size category; UK’s Happiest City; Most Competitive Large City in the UK; UK’s Best Port of Call; and Top Must-See UK city.

So, that'll be more local democracy, better schools, more housing (and since then, as Paul Edie's blog shows),  homelessness slashed and housing services much improved,  better social care, more facilities, encouraging jobs and the economy and plenty accolades. You wouldn't think any of this by reading the local  papers.
Jenny's article only scratches the surface - but how many people in Edinburgh know all of this? This result is the kick up the rear our lot need - they will have to become better at showcasing Council achievements and success stories which we are responsible for.  They will also have to start strongly rebutting the nonsense the opposition put about. We've shown our values in what we've done in Edinburgh - more say for local people, better education to help them get up and get on, decent care for the most vulnerable. That's what we're about.
Our Councillors are fantastic people who have done excellent things, but they aren't reaping the electoral rewards because nobody knows about it. They have to step out from their desks and be more proactive about selling themselves.  Faint heart never won fair voter - so they need to get out there, knocking on doors, round every fete and gala meeting as many people as possible. They need to be much more aggressive in their campaigning and they need to communicate better with their activists. If they can do all that, they can do really well in the Council elections next May.
We may have come bottom of the poll today, but that's no reflection on our excellent candidate Alastair Hodgson and his hard working campaign team. In fact, as in every other by-election recently, we were picking up loads of second preferences, so people do still like us. Our challenge is to persuade more of them to like us enough to give us first preferences to keep us in the race.
Oh, and one anecdote from the Count - at 10am on Fridays, they test the fire alarm in the City Chambers. So we were expecting it to ring - but it kept on and on and on. Eventually the Returning Officer said we were going to have to evacuate the building. The thing is, she didn't tell us where the fire exits were. Normal visitors' passes to the City Chambers give you that information, but the count passes didn't. Most of the hardcore political activists didn't move after the counters left the room - the ballot papers were left lying on the tables and we were all making sure that nobody interfered with them. They clearly hadn't planned for such an eventuality as a fire during a count. Now, if there had been a real fire, the important thing is to get everyone out and if the election had to be re-run because the ballot had been compromised, so be it. It felt like longer, but it was probably only a few seconds before the bell stopped ringing and normality was restored. If it had been much longer, I think I would have left.
And one final picture - a lovely one of Alastair and his girlfriend Rebecca 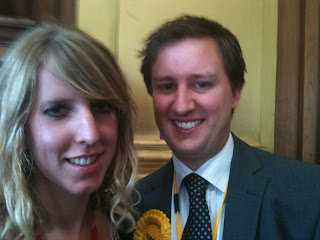 So, Liberal Democrat Councillors in Edinburgh - get on with it. You know what you  need to do to turn things around and make sure we hold and gain seats in May.
Posted by Unknown at 4:36 pm

Good post that echoes many of my own feelings.

Pleased to see the Jenny Dawe article though I have to say the council governance thing is very boring and NOT the lead reason for the campaign.

Good post that echoes many of my own feelings.

Pleased to see the Jenny Dawe article though I have to say the council governance thing is very boring and NOT the lead reason for the campaign.

To be fair Caron, as it is a by election to an STV election it can only be carried out under a equivalent proportional system. Therefore while Mr McGill may have campaigned against AV, this was an election as a result of STV being used in both the northern devolved nations local authority elections.

Though in the case of one by elections do not currently take place :-(