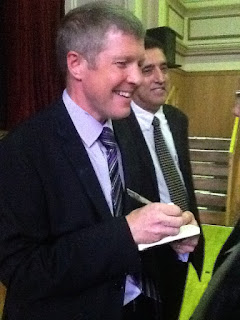 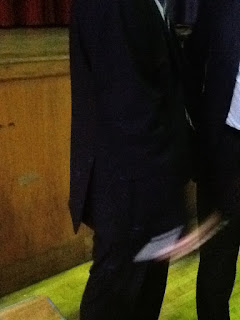 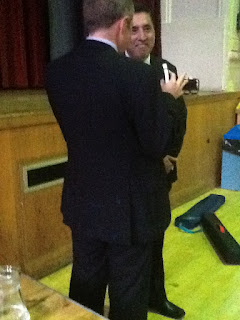 You can clearly see the paint splatters on Scottish Lib Dem leader Willie Rennie's shirt and suit here. As Nick Clegg arrived for a private meeting with a packed hall of Scottish party members, a man who is now getting better acquainted with Strathclyde Constabulary threw blue paint at him. A policeman took most of it but Willie was fairly well splattered.

You will know more about this incident than I do by now by virtue of rolling news channels.

I really could kick myself for arriving 5 minutes too soon. I mean, I am never early for anything, but I was today. I am also wearing a bright blue coat so a bit of blue paint wouldn't have been noticed.

We were chatting away inside when we heard of the incident outside. When Willie & Nick appeared, they characteristically made light of it. Willie joked about how he'd always wanted a blue streak in his hair but his mum wouldn't let him.

The sad thing is that Willie was outside the hall for about half an hour saying hello to every single person who went in. If the person who did this had wanted, he could have had a good chat with Willie about his grievances & Willie would have tried to help.

By the way, Willie is clearly the greater, not lesser, spotted Rennie as he is literally getting everywhere these days, usually in Alex Salmond's face. Today was an interesting day for Willie, beginning with praise in the Telegraph from Alan Cochrane again for being the only leader holding Salmond to account and ending taking the lion's share of paint meant for his fellow leader. 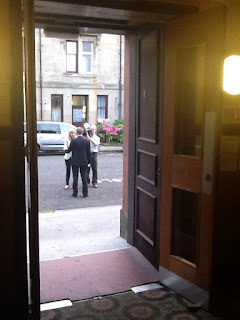 I guess the upside of tonight is that people now know that Nick was in Glasgow, talking to lots of Lib Dems and they'll know from lots of tv interviews that Willie has a great sense of humour & that Nick talked about all sorts of good things we're doing in Government, cutting tax for the poorest, improving pensions and ending child detention to name but a few. 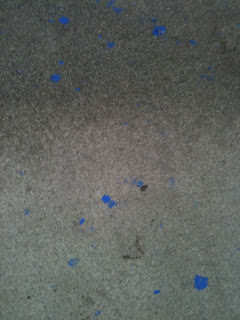 Posted using BlogPress from my iPad (or would have been had BlogPress not thrown a fit and refused to publish the photos. Have had to faff for ages and I haven't had my dinner yet.


Location:On train home from Glasgow
Posted by Unknown at 10:20 pm

So, you still advocating Clegg gets out & about in Scotland more? I hope he does - I can't find any pics of him covered in paint.

DId I spot you on Sky News? I think you were standing next to a couple of policemen outside the venue, chatting on your phone...

There is no point in speaking to people who only want to hear praise.

You might have done! Bright blue coat? My ego has now forced me to switch to the infernal wickedness.

I'm amazed that Clegg has the guts to show his face in Scotland...

But more, I am amazed that any Liberal would be proud to take any kind of praise from the Arch Tory Cochrane. As long as Cochrane is having a go at Alex and Scotland he's happy.

As for getting up Alex's nose, well Cochrane just loves that no matter how or why it is done, but is Rennie doing his nose tunnelling constructively, and why doesn't he see that this government wants to take people along with them?

With all his men and women behind him Gray managed to lose the confidence of the Scottish people because all he did was oppose for the sake of it. He did sod all constructive for Scotland. No matter what it was oppose, oppose, oppose. Rennie appears to be doing the same thing.

He's already on a loser because he's attached to Clegg by the coat tails and Clegg is half way up Cameron's backside. And Cameron is HATED.

Either they were trying to paint his face blue Braveheart-style by way of a welcome or this was a publicity stunt for the new smurfs movie.

Please tell me this blog post is a spoof.

Concerned, it's a wee bit light-hearted.

Tris, we have some progress - you recognise that Nick Clegg is a really brave guy who has not shied away from doing difficult things.

Since the election, all the SNP have done is moan and pick fights with Westminster. It's been a 100 day rant from Salmond. People are uneasy about what they are seeing - and Willie is rightly standing up to Salmond. People like his style - and his ability to be constructive such as on minimum alcohol pricing.

The fact that the SNP hate Willie so much just shows how effective he is being.

" People are uneasy about what they are seeing - and Willie is rightly standing up to Salmond."

No they're not and no he isn't.
How many thrashings in the polls will it take before you realise that the Lib Dems are just a standing joke in the UK ? Even your leader's forays into North Britain are treated with contempt by former Lib Dems.
I'm concerned that you're wasting your life supporting such a lost cause. Why not support Scotland instead ? You might hate the SNP but you must admit that they are only standing up for their country.

Concerned, I don't hate the SNP. I am in fact better disposed to them than most Lib Dems.

I just despair at Salmond's antics since the May election. So much posturing, so little substance.

Caron: The Tory policies aren't working. What's brave about hurting poor people for no good reason, while the rich get richer? Clegg is Cameron's toady. That's why they painted him blue. He's an insult to the colour Yellow. I gather it was Liberals who did it.

As for Willie being successful because he is hated. I'm afraid that says all we need to know about the Liberal tactics.

Iain Gray mark 2... Oppose for the sake of it; try to outsmart Alex Salmond, while the country goes to hell because of Conservative cuts aided and abetted by the Liberals.

How ridiculous of you Caron to deliberately misconstrue the people with the press. The press may indeed be Rennies greatest cheerleader, but hardly I think the people. If that were not the case then why, pray tell did the Lib Dems do so badly in the Inverclyde by-election, (lost deposit wasn’t it)? Despite the likes of Cochrane and the usual right wing unionist nut-jobs telling everyone how well the failed MP was at keeping Alex in check. What colour is the sky on the cloud-cuckoo land that you live on.....Blue??

Well Caron.... we will get to measure Willie Rennie's wonderful "performance" and the people's "disgust" with Salmond's "arrogance" when the 2012 local elections come.