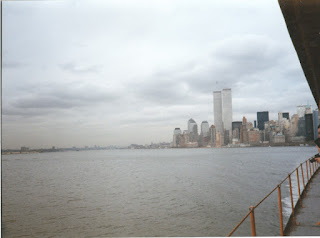 The Twin Towers of the World Trade Center were, to be blunt, not the prettiest buildings on the planet. I had mocked their sterile shape and structure many times and I'm sure I wasn't alone. What we wouldn't give to still have them here, though, for the atrocity that took place a decade ago to have been confined to a nightmare after consuming a particularly pungent selection of cheese.

In December 1994, my friend Sue and I went to New York City on a five day pre Christmas adventure. Actually, if the truth be known, we went to see Star Trek: Generations, which had come out in the US a full 3 months ahead of the UK and we sat in a cinema near Time Square (not one of the dodgy ones) watching the movie. There was  some deal on two features so we also watched the remake of Miracle on 34th Street as well. Not quite two films you would put together but both were very enjoyable.

The picture above was taken from the Staten Island ferry. The Manhattan skyline mesmerised me and I ended up taking so many photos. I really must upload some more of them, especially those of the Chrysler Building, which has to be one of the most attractive pieces of architecture anywhere, ever. Pyramids? Forget it, that art deco roof is the bees' knees as far as I am concerned.

Further away, you could see even more how the Twin Towers dominated the skyline. The buildings around it look tiny, but when you're down at street level, they are massive. 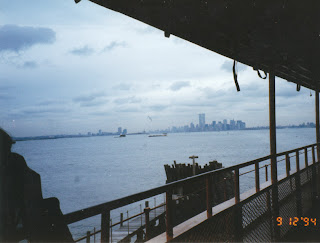 And here's a shot downtown from the top of the Empire State Building. 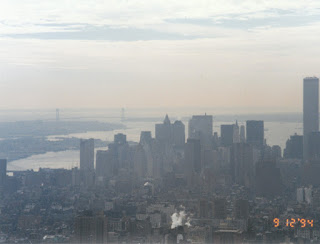 And, finally, one of me at the bottom of the North Tower. The yellow bag was stuffed full of my purchases from Barnes and Noble bookstore. Our flight wasn't till the evening and we couldn't find anywhere to check our bags. It was a nightmare carrying it around, crammed as it was with books I wouldn't get at home, including a copy of the Tower Commission report bought for a dollar from the second hand bit of the famous bookstore and the memoirs of Peggy Noonan, speechwriter to Reagan and Bush.  Please forgive the flowery leggings - I was very attached to them. 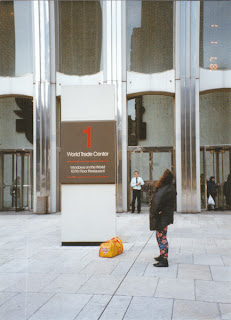 The friendliness shown to us that long weekend in New York by the locals made me totally fall in love with the city. I felt so sad for its residents and workers that awful day 10 years ago. I so want to go back there. Beautiful, lively, happy city, with fabulous people.
Posted by Unknown at 7:59 pm

Email ThisBlogThis!Share to TwitterShare to FacebookShare to Pinterest
Labels: 9/11, Caron in New York