Total Politics have published their top 100 Lib Dem Blogs of 2011. I am thoroughly amazed and delighted to have come second behind the fabulous Liberal Democrat Voice.  They are a small team, all of whom have day jobs who work incredibly hard to scratch every conceivable Liberal Democrat itch.

For me, though, the most exciting thing is that, in the worst year for the party in a long time, Scottish Liberal Democrat bloggers make up half the top ten. There's me and Andrew Reeves at 4, Stephen (who might have escaped to Northern Ireland but is still a member of the Scottish Liberal Democrats), Andrew Page's A Scottish Liberal at 7 (equal with Liberal Vision, although very, very different, thankfully) and Fraser MacPherson at 9. It's not so much a Celtic fringe, but the full blown Celtic mullet.

It doesn't stop there, either. We also have Living on Words Alone by Dan Falchikov who is as much of a Scot as Jeff from Better Nation even if both live in London, I'm claiming Cicero too, Gavin Hamilton's A View from the Hills, David May, James Taylor's Liberal Thought,  Sanjay Samani, Wild Women, Liberal Landslide, Climbing Russell's Mountain, Paul Edie, Nic Prigg, An Independence Minded Liberal by Douglas McLellan and the awesome Liberal Youth Scotland.

That's 19 out of 100.  A far cry from the day when it was really just Andrew, Stephen, Fraser and I. Less good is that there are only 3 women, myself, Nicola Prigg and Wild Women. There are plenty women I know who would be fabulous bloggers - yes, I'm looking at you, Siobhan Mathers, Sophie Bridger, Katy Gordon, Amy Dalrymple.

The Party may be going through a rough patch, but that brings out the thinkers, the ideas people and that's what we're seeing with this huge upsurge in Scottish Liberal Democrat bloggers.

And as an aside, how I wish I could be down in deepest Berkshire to see the look on SNP blogger Will Patterson's face when he finds out that he's number 96 in the Lib Dem list. Some strange things have happened with the categorisation this year.  No doubt it'll be corrected at some point so as long as nobody's taken a screen grab, he'll be able to keep it quiet and pretend it never happened. 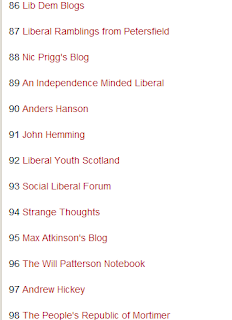 Lets get Siobhan, Katy, Amy and Sophie writing the odd post for Scots Gazette as we get that going for the Scottish conference and onwards - and any other blogs they are part of.

I know they and others have things to say, things to feel and things to observe.

I knew about the London Scots like Dan and Cicero but that's at least 4 people you have just introduced to me that I didn't know were Scottish.

Have to say I was surprised to be even in top 100 of anything. Have to say you, Andrew Page and though not Scottish, Andy Emmerson deserve being right at the top.

I'm doing my best to be flattered by the ranking. Though if I were the gaffer at Total Politics, I'd be issuing P45s to my research team about now! :)

what does "as much of a Scot as Jeff from Better Nation" mean?

Why are you suggesting I am less Scottish than any other Scots person? Is it clumsy or calculated? I hope the former.

Purely & simply that wherever you two live in the UK, you always count as Scottish bloggers.