Iain Dale's Total Politics awards have come out with a whimper and not a bang this year. It all has the impression of haste about it. The poll was conducted over a couple of weeks in August, rather than July as in previous years and the results are a lot later in coming out. They're also doing several lots per day which doesn't feel particularly special. There's also no Scottish list, which is surprising as that was one of the categories we were asked to put our choices in. However, Scots seem to be doing reasonably well with Better Nation, Lallands Peat Worrier, Bright Green Scotland and The Burd deservedly featuring in the non aligned, Green and lefty lists.

Anyway, the reason for this post is to tell you that as I was scanning down the list of media bloggers published yesterday,  I was quite surprised to see our Andrew Reeves at number 27. 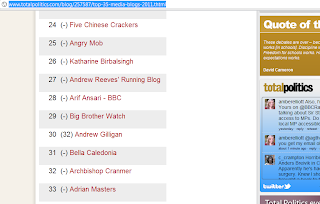 I'm not quite sure how that happened, but he's beaten Andrew Neil, who could only manage 34th place and that can only be a good thing.
I am fairly certain that if he were here, he would have howled with laughter and thoroughly enjoyed the experience.
I just hope that those who voted for him in clearly large numbers as a media blogger also ticked the Liberal Democrat box.
Posted by Unknown at 9:39 am

Yes, it is very strange the way they are doing it.

And, I saw that - not sure how Mr Reeves got in that list!!