Farron rocks it at the Glee Club - the photographic evidence #ldconf

The Glee Club is the traditional end of  Liberal Democrat Conference get together. Hundreds of us cram into a room that's way too small and usually hideously hot, drinking lots of beverages for cooling purposes only and singing entirely respectful songs about our triumphs and tribulations over the years. Any similarity to the tv programme Glee is entirely coincidental. I doubt that resident hosts John Bridges, Gareth Epps and Richard Clein have anything in common with pyschopathic cheerleading coach Sue Sylvester. Or at least not much.

I haven't been to a Glee Club in 12 years. I was looking forward to it probably more than anything else in the entire week. You kind of wonder if time has made you look at it with rosy coloured spectacles and could it possibly be as good. Yes, frankly, it was.

It started off all sophisticated like - a jazz band, The Superinjunctions, accompanied by John Hemming.
It was wild, many of the jokes were terrible, but it was such a laugh. Singing all these old songs, plus some new ones, really gets the endorphins going.

And then there was the guest appearances. Lembit Opik was owned by Linda Jack on a spoof of Just a Minute. Simon Hughes did a wee turn. So far, so very 12 years ago. But there were the new Glee Club regulars to come. First of all, the Party President Tim Farron doing his own inimitable version of the Ting Tings "That's not my name." 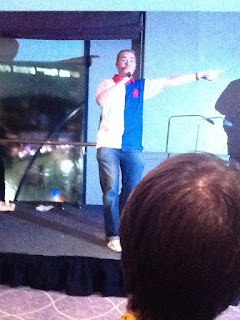 Paddy Ashdown also appeared to tell the same joke he apparently tells this year. I was quite alarmed when he threatened not to tell it at all because the last time I was at the Glee Club he was party leader and I'd never heard it. He said that he would only tell it if we didn't laugh at all at a different joke - which, ironically, I had heard him tell before. I won't repeat either in case it spoils your enjoyment of next year. He was in really good form and stayed around for quite a while after his turn. 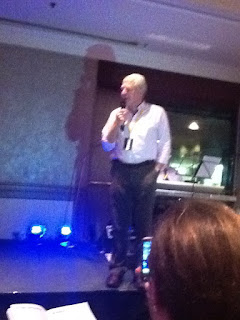 Our party has always been very good at taking the mickey out of itself. Three decades ago, when the predecessor parties merged, some funny old Liberal people rewrote the 12 days of Christmas to suggest that the Social Democrats may not have given a great deal to the Liberals. The climactic five gold rings became B***** All, for example. Naturally, this was adapted last year to "The Twelve daysof Coalition". The gift on the first day was "A referendum on AV." Two additions to that line, made up from the floor, "which we lost" and "badly" will, I suspect be added to the "official" script for next year.

And I close with a picture of the Irish mob on stage singing Danny Boy, led by our very own Stephen Glenn. 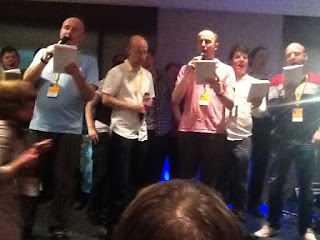 There is an audio boo of "12 days of coalition" uploaded by Nick Thornsby I believe- http://audioboo.fm/boos/477725-some-libdems-don-t-think-they-ve-got-much-from-conservatives-12-days-of-coalition-at-the-glee-club

The start is cut off but still excellent.

Thanks, Nic. It was Nick Sutton. Excellent stuff:-). Just played it to Anna. She thought it was hilarious. Wonder if there's any chance of the National Youth Choir of Scotland using the Liberator Songbook as practice material.

I can't believe we had to go and Paddy did his joke AFTER we left! I thought it was bad enough having missed Ilkley Moor B'aht 'At.

That does it. Hang the expense. I'm starting saving NOW for a hotel next conference.

Shame the recording is too far away to hear who added which we lost first on 9th verse to end the dispute.