Tory MP Peter Bone is a bit of a maverick. Fiercely Euro-sceptic, he asked David Cameron, on behalf of his wife, in June for an assurance that we'd never bail out any of these European types.  The Independent says he described the NHS as not being of place in Stalinist Russia and once paid a trainee only 87p an hour. He's definitely one of the more untameable right wing Tories.

So what on earth was he doing at our Conference? Certainly not meeting like minds.  In fact, he was there to appear on Newsnight on Monday night to talk about his angst that we are stopping the Tories from putting many of their policies into action. You can see the whole thing on iPlayer here.

I was in the audience for this live show. I'd been contacted earlier in the day and asked to be part of it so at 9:30 I duly trooped up, ironically, to the Sky News stand where we'd been asked to congregate. We were then taken into the Conference hall. We could see Nick Robinson and Huw Edwards do the 10 o'clock news from the other side of the room.

Paxman appeared before 10 and started to shoot his intro and links. He was actually really funny and not at all severe off camera, indulging in a little light banter with the crowd.

At 10:30, the programme started. We obviously couldn't see all the videos that were being shown, but we could hear the audio. The first item was an interview with Vince Cable who got a big round of applause when he came on. Bizarrely, Paxman obsessed for ages on comments Vince had made about the Euro 10 years ago rather than anything that was actually happening today.

And then it was time for the comedy turn. Peter Bone, MP for Wellingborough came on and was applauded loudly by us every time he opened his mouth about how much influence we were having on the Government. Paxman started by asking him if we were grateful enough to the Tories for taking us into Government:

He replied "Oh, definitely, yes" when Paxman asked him if he thought we had tainted the Tory brand, and, pressed to give examples of how, he said:

So many things.....  I’ve voted more times against the Government than most liberal MPs and that does seem to indicate that the liberals are getting more of their own way.
We were going to bring powers back from Europe and that’s been stopped and lately there’s been the health reforms have been dramatically been changed because of what the Liberal democrats have done.

A particular highlight of this was seeing our own Callum Leslie take on Paxman and win in the audience discussion, telling him that the media didn't get our party, how they were misrepresenting what we were doing. It's a brilliant contribution.

This was one spirited audience and they gave the veteran broadcaster quite a run for his money.

You can hear me say in part of the rammy at one point, when we were being asked if we'd rather be in coalition with Labour or the Tories that we want to implement Liberal Democrat policies but I didn't make a contribution on my own.

Peter Bone did make me smile, though, when he was lamenting that we had more influence on the coalition than the Tory right did. It proves the point we've been making all along that we are taking the sting out of the Tories. 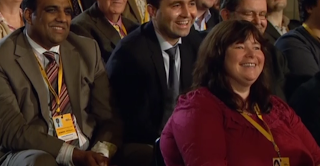 The only thing is that when this finished at 11:30, I still hadn't had anything to eat. I ended up buying a burrito from the stand near the Jury's Inn. And I'm still alive, which is a bit of a surprise. Not even a moment's nausea.

I think it's clear that if we weren't involved in the coalition, people like Peter Bone and Nadine Dorries would have a huge influence on Tory Government policy. That has to be a good thing.
Posted by Unknown at 12:34 pm