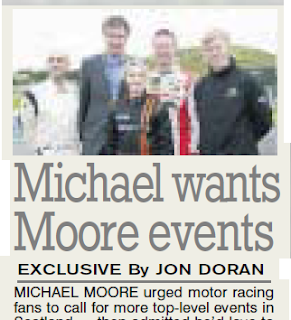 There are definitely some perks to being a Government minister. And we do seem to have our fair share of petrol heads in our party. Remember last year, when Vince Cable got to drive an Aston Martin and a chocolate power car made of carrots?

Last week, as reported in the Sun, above, Secretary of State for Scotland Mike Moore went to the British Touring Car Championships at Knockhill. My first reaction on hearing this was pretty much pure jealousy. I clearly missed a trick. I mean, why on earth could I not have interviewed him there rather than sitting at my kitchen table in my jammies. Just to be clear, Mike was many miles away - we did the interview over the phone. Well, if I ever get that chance again, I'll be smart enough to enquire if he has anything exciting in his diary I could meet him at.

Mike spoke about the benefits motorsport brings to the economy - and talked about wanting more events in Scotland. Well, I've been saying for a while that I'd love to see an F1 race on the streets of Glasgow. He's passionate about the Jim Clark rally in his constituency.

He talked about how he "got a kick" out of an earlier trip to the circuit when he got behind the wheel of a kart. That must have been a tight fit because he is incredibly tall.

While I was looking to see if there was an online version of that article, I found this - an audioboo from Tweetminster recorded at the Lib Dem Conference in Liverpool last year. There was a motorsport fringe and afterwards Mike was interviewed with Alan McNish. Alan predicted that Mark Webber would be World Champion last year. I'd love to have those days back again, when we thought it might happen. Maybe next year. Anyway, enjoy.

Instead of enjoying himself at our expense tell him to defend Scotland and not undermine it for self gratification.