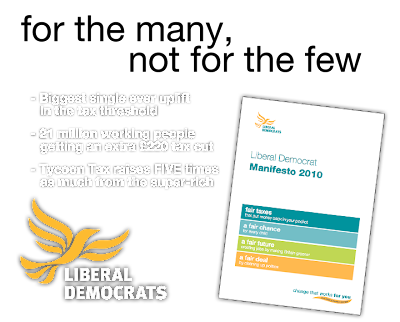 There you have it. The front page of the Lib Dem manifesto from 2010. The very top priority, of raising the tax threshold to £10,000. By rights, if we were doing it in equal instalments, the tax threshold would have been raised to something like £8700 today. Lib Dem ministers, aware that people are struggling with increased costs, managed to successfully argue for a much bigger rise to £9205. In Scotland, that's 160,000 Scots out of Income Tax altogether and 2.1 million Scots getting a  tax cut. Across
It's good stuff.
We were always going to take a beating for allowing the Tories to cut the highest rate of tax from 50p. However, I don't think we should be taking lectures from a Labour party who only introduced the  rate in the first place at the very tail end of their 13 years in office. Even next year that rate will still be 45%. The tax system Labour presided over allowed a super rich banker's marginal rate of taxation to be less than that of his cleaner on the minimum wage. In contrast, in this Budget, those on higher incomes will still be paying more tax with the Stamp Duty and Capital Gains measures.Those on incomes of more than £150,000 will be paying on average £1300 a year more in tax. Ultimately, this budget will yield five times more in taxes from the wealthy than the current situation.
If the Tories were governing alone, they'd have got rid of that 50p rate 2 years ago, they would have slashed Inheritance Tax and brought in their ridiculous marriage tax break. On tax, it's clearly the Liberal Democrats who are winning the arguments within the Coalition.
It's also worth noting that the second pledge on that Lib Dem Manifesto, the Pupil Premium, is now implemented in both England and Wales. Maybe Willie Rennie should think about campaigning for it up here.
I still feel that I want more information on the rationale behind freezing the personal allowances for the over 65s. Thankfully, I'll have the chance to find out because I'm taking part in a special online Q and A with Danny Alexander tomorrow night. It's for party members only, and there are a limited number of places, but if you want to see if there are any left, you can do so here.  Looking at it, though, pensioners are already £500 a year better off from our first two years in Coalition. They've just had the biggest ever rise in the State Pension due to the triple lock and all the things they get like the Winter Fuel Allowance (much to my annoyance, but that's another story) and cold weather payments are intact. There is no cash hit for pensioners as a result of the personal allowance thing and they are better off because of other things the Government has done.
In Scottish terms, I'm really pleased about the video gaming tax relief which will be a huge boost to the industry, mainly based in Dundee. You might remember that my Anna has been a junior judge at Abertay Uni's Dare Protoplay event for the past few years. Just as an aside, Swallowtail Games, one of last year's winners, won the BAFTA they were put up for. I'm thrilled about that because their game was fantastic and they were led by one of the few women in the competition. This tax relief helps them to develop.
Some Liberal Democrats will feel uneasy about the tax breaks to oil and gas companies, but for Scotland there's a specific benefit. We did upset the oil and gas sector a bit a couple of years ago with a tax hit, but the measures announced today will give them the confidence to explore fields west of Shetland. They can invest safe in the knowledge that they will have tax relief for the eventual decommissioning - and it also gives Scotland the chance to become a centre of excellence for the decommissioning process.
Willie Rennie had this to say about the Budget:

Left Foot Forward argues that the Red Book says different and that the poorest do badly: http://www.leftfootforward.org/2012/03/budget-2012-impact-per-decile/

Alex Massie at the Spectator also questions the claims: http://www.spectator.co.uk/alexmassie/7729504/the-cost-of-living-like-this.thtml

The devil is in the detail.

This was a budget for the rich at the expense of pensioners and the poorest in society now how can I spend that £40,000 from the reduction of the 50p tax rate. A good old Tory party budget aided by the LibDems roll on the elections.