This is the story of how I found myself staring at this at around 12:45 yesterday: 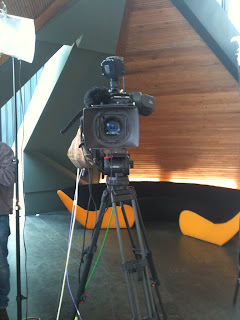 I was sitting at my sister's dining room table on Thursday afternoon writing my cosy blog post about the weekend ahead when my phone rang. It was the BBC Sunday Politics office wanting to know if I'd appear on the programme on Sunday. I assumed they meant from Inverness, but they wanted me in Glasgow. That was never going to be possible. I miss Malcolm Bruce's speeches for no-one, not to mention Willie Rennie and the topical motion on a two question ballot paper. Thankfully, though, after a bit of checking, they decided that I could do it "down the line" from Eden Court theatre.

For those of you who haven't done this, "down the line" means standing there looking into a camera, with an earpiece and a microphone, ready to have a conversation with someone you can't see. I just decided that I'd treat it like I was talking on the phone. I certainly do enough of that.

Now, I write for a reason. Normally when I'm confronted with a camera, I get a bit like a deer caught in the headlights. I think of a bit of video encouragement I did for Jo Swinson's marathon fundraising last year, or a shockingly bad experience with a BBC camera 4 years ago when I was asked to explain why I supported Nick Clegg and made an absolute horlicks of it.

You can tell as the interview progresses that I relaxed more and more into it and became more sure of what I was saying. I think the difference was having a few days to think about it and having that wee while to get "into the zone" in front of the camera.  It's not like I was put on the spot and had to think really quickly what to say.

The first question was basically "Is Nick Clegg forgiven?" I'm glad I managed not to fall into that trap. I kind of fell over my words a few times, but I'm in good company  on that one. I hope I got across the very positive mood of the Conference and the different strands of our recovery, the development of ideas as evidenced by Robert Brown's new book, the fabulous next generation of people like Sophie Bridger, Kris Chapman, Eilidh Dickson, Alex White, Kavya Kaushik and David Green from Liberal Youth Scotland and the fact that new and talented people are joining us again. As well as that, we have the fabulous record of our councillors to showcase over next few months.

To my eternal shame, I actually used that cheesy phrase "Liberal Democrats campaign all year round". Oh dear. What will it be next? You know that Willie Rennie, he has a record of action, a promise of more? That Jim Hume, he's a worker, a winner. Dear, dear.

I could do with keeping a bit stiller and at one point when I wasn't being spoken to, I scratched my nose, not realising I was visible to the world on the big screen behind Isabel Fraser. It was quite a weird set up as it was  more two interviews being conducted at the same time - me from Inverness and Ian Smart in the studio. I don't see how they could have done it any differently, though. I certainly hadn't been paying any attention to goings on at the Labour Conference so couldn't comment on that.

I wish the BBC would let you embed these things, but the link to the programme, from pretty much the right place in the programme, is here if you want to see my moment of fame for yourself. In the end I quite enjoyed it and would do it again despite the inherent scariness.

I've also appreciated some good feedback from people, including The Burd, who said I lit up the screen. That was lovely.
Posted by Unknown at 12:13 pm

Glad you enjoyed doing it - and hope it's the first of many!