Salmond squirms when confronted by Willie Rennie over Murdoch

Rupert Murdoch tweets on 20 February that he supports Scottish independence.

Alex Salmond plays down Murdoch role in Leveson Enquiry in a letter in the Sun on Sunday on 26 February - whose launch he described as good news..

This week Andrew Neil tweets that Murdoch says that he supports independence as revenge against the UK for Leveson. 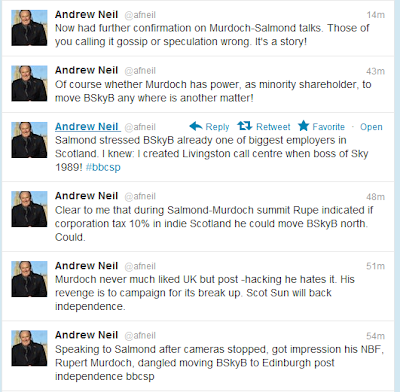 We all know that there would be no Leveson without the revelations that News of the World journalists hacked the phone of Milly Dowler after she went missing causing huge distress, after false hope, to her family.

But this series of events looks quite compromising for the First Minister. Willie Rennie is furious about it.

In the first edition of the Sun on Sunday the FM played down the role of the Sun, the News of the World and News International in the phone hacking scandal. Using a defence "it wasn't just them, others did it too" the First Minister lent his support to Rupert Murdoch yet was silent on the victims of phone hacking. Does the First Minister believe that hundreds of victims will be satisfied with his failure to stand up to News International?

I don't know if Willie Rennie managed to attend this Chamber last week  (that was a wee dig that Willie doesn't get to ask a question every week) when I reiterated and made it absolutely clear of my full support for police investigations north and south of the border and the Leveson Enquiry but I do think Willie Rennie should take on board since the then Government did nothing about it of Operation Motorman. I promised that would be placed in SPICE  in case the identification by the Information Commissioner of potential criminality in data protection hadn't been fully understood by this Chamber.  He'll find it extends across the London press, very few Scottish examples but every single part of that should be analysed and looked at in terms of phone hacking. I hope Willie Rennie will accept our total commitment in seeing that the law is upheld.


So far so much barely relevant waffle and so little mention of sympathy for the victims of phone hacking. Willie Rennie continued with his line of questioning:

He prefers to cosy up than stand up to Rupert Murdoch. Earlier this week he was caught bragging about Murdoch's support for independence and then we discovered that Murdoch wanted to break up Britain in revenge for the Leveson phone hacking enquiry and our First Minister is only to happy to leap on that and ignore the victims. That was the trade, wasn't it? I'll scratch your back, you'll scrap mine. It's not the column in the Sun on Sunday that's the problem, it's not the cosy fireside chats with Rupert, it's not even the free tickets to tgeh golf.  My problem is rather than stand up to Rupert, he's defended him. HE's put his interests above those of the victims Is the First Minister not ashamed of this grubby deal?


You could tell how uncomfortable Salmond was. We've become accustomed to him assuredly swatting away questioners like they were vaguely annoying flies. Not so this time. His fist was clenched, he could barely look up, he started scratching his nose. He was the personification of shiftiness. It took him a good minute to basically reiterate what he'd said to the first question. Then he said how he was going to start talking about the Liberal Democrats and Michael Brown. He was falling all over his words, though until he reached into the recesses of his brain for a decent insult and came up with the line that the Liberal Democrats had put the moan into sanctimony.

Not a single word again about phone hacking victims. He didn't deny that he had done a grubby little deal with Murdoch. The contrast between the cool, crisp, calm Willie Rennie and the flailing Salmond was quite a revelation. Willie has definitely found an Achilles Heel.

But do you know what? I didn't enjoy it. I don't want to have a First Minister who compromises himself like Salmond has done with Murdoch and Trump before him. You expect more from someone who holds that office. I'm actually quite angry with Salmond that when confronted with the reality of his dealings with Murdoch, he didn't have an answer. He was literally lost.

I wanted to see Salmond express sympathy for News International's victims, to say something about the culpability of the Murdoch empire. He might go back to his office, throw a tantrum and fashion a slick line for the future, but it'll be too late. When confronted with the realities of his actions, he could not find the words to justify them.

Better Nation's Jeff Breslin is no friend of the Liberal Democrats, so I took it as high praise indeed to see these tweets from him today:

Willie Rennie really made the First Minister squirm today. It had to be done - but it wasn't a pretty sight.
Posted by Unknown at 1:52 pm

If they comply with my comments policy, they get through.

If I remember correctly, the last time you commented, you called me a fascist, disgusting Nazi whore among other things. I don't have to put up with that sort of rubbish.

There is a real possibility that Murdoch will bring several hundred jobs to Scotland and, to increase the probability of that happening, Salmond has to watch how critical he is of Murdoch's empire.

Can you confirm, Caron, if it will be Libdum policy to withdraw support for investment in Scotland, with the jobs that brings, if the investor is less than palatable?

See, that's the thing about being irrelevant, you can be as "cool, crisp, calm" as you like because it's not people's lives or job prospects your playing with. But if Murdoch turned round tomorrow and said he was no longer considering bringing those several hundred jobs to Scotland because of Rennie's comments, I could guarantee that not even a truck load of Sure Active deodorant would keep Rennie and his libdum colleagues "cool", and he'd only be "crisp" because he would be getting spit-roasted over the loss of those jobs. We soon see how "calm" he'd remain then.

Of course, there's absolutely zero change of Murdoch saying that, or reacting at all to Rennie's comments. I support being irrelevant does have some advantages.

Neil Craig, there is no right to free speech on someone else's blog, especially if Caron's recollection of your comments is anything like close to the mark.

Caron, the Lib Dems can complain here to a large degree without being seen as hypocrites - unlike Labour and the Tories - but to be honest I don't think that people in, say, Livingston or Fauldhouse would care what Rupert Murdoch's motivation for expanding Sky's footprint in Scotland was. You'll never see Boris or any English mayor saying to a business "Oh no, please go somewhere else, they need the jobs more!". And Salmond shouldn't say that either.

Angus, thanks for that. And in fact there were seven insults all together in Neil Craig's comment. Racist was another but I've forgotten the rest.

Re Salmond and Murdoch, though, the point is, and where the FM crossed the line, was defending Murdoch on the phone hacking in that first issue of the Sun on Sunday. He's put himself in a position where it looks like he's defending the indefensible in return for the support of a media tycoon for independence. It's very compromising and I get the impression that a fair few people in the SNP are uncomfortable with it. You guys are usually so, so loyal and stick together no matter what, but there are cracks on this issue.

Forteanjo, since when was it part of the FM's duties to gloss over criminal activity like phone hacking with no mention at all for the victims?

That's what this is about. It looks like Murdoch has supported independence while Salmond effectively says that phone hacking was no big deal. We wouldn't have Leveson without the revelations about what the News of the Screws was up to.