Lib Dem News says Galloway a curiosity, rather than a serious candidate

I love Lib Dem News. Even though I can find out a lot of things going on in the party from other sources, it still tells me things I don't know.

In order to get out for Friday, though, the party paper's deadline has to be before the election results come through on a Thursday night/Friday morning. This week that was patently obvious. 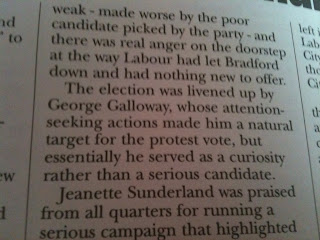 On the Bradford West by-election, the writer of the "Jeanette says thank you" article had this to say about new MP George Galloway:


"The election was livened up by George Galloway, whose attention seeking actions made him a natural for the protest vote, but essentially he served as a curiosity rather than a serious candidate."

Well, the Chicago Tribune survives to this day, and so will Lib Dem News, but you have to admit it's funny.
Posted by Unknown at 10:43 am

Sad to see the person writing that swallowed the London-based media's and/or the Labour party's Kool Aid.

Yes. A victory of that magnitude must have been tangible for a few days, though in Dunfermline it turned for us in the last week.