The woes of Benjamin Bunny

Our lovely little rabbit Benjamin is not well. Normally he and his brother Patches come bounding out whenever we go to see them, even at 6 in the morning when Bob gives them their carrots for breakfast.

They were a bit quiet at the end of last week and there was food left over, which was unheard of. On Sunday Benjamin developed a head tilt. I googled and was very scared by what I saw and hoped that it was the one thing that was relatively simple to sort rather than the many conditions which forecast doom. I actually didn't sleep very well on Sunday night because I was so worried about him.

I took him to the vet yesterday and she reckons he has E-Cuniculi rather than an ear infection and he doesn't have the pus associated with Pasteurella. This means a 28 day course of oral medication. 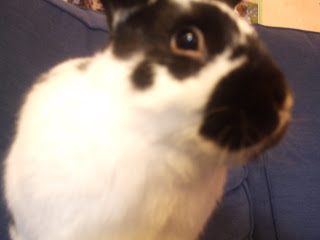 One thing about our Benj is that he really isn't so keen on you going anywhere near his mouth. They get handled and cuddled a lot, but their daily affection tends not to involve us poking around in their orifices. He has always, since bunnyhood, not wanted his nose touched and we've respected that.

The vet gave him his medicine yesterday. This involved wrapping him up in a towel, and warning us that bunnies could break their back if they struggle too much. That frightens me. I was able to sleep last night by indulging in the fantasy that we'll stick him in his carrier today, say "Come on, Benjie, come to Mama and get your lovely medicine", and he'll just come and sup from the proffered syringe. He did seem to like the taste yesterday....... I'm sure that won't happen and if anyone has any tips for dosing a recalcitrant rabbit, please tell me.

The consequences if he doesn't take his medicine are not good, so it's kind of essential that we find a way that's not stressful for any of us.
Posted by Unknown at 9:06 am