It's not been an easy few weeks for the SNP. Even before yesterday's revelations from Leveson, Alex Salmond was squirming when Willie Rennie confronted him over his close ties to Rupert Murdoch which led to him playing down the phone hacking controversy when writing for the Scottish Sun on Sunday.

They've also had to expel one of their MSPs, Bill Walker, who was accused of domestic violence against 3 former wives. Worse, last week's Sunday Herald reports that Deputy Leader Nicola Sturgeon's office, although not Ms Sturgeon directly, had been told of the allegations a full three years before he fought the Dunfermline seat.

Now, there are question marks over the SNP's conduct at all levels during the Council campaign. On one hand, the local Government minister, who is also the SNP's election co-ordinator announced that the Government was giving £40 million to councils to offset cuts in Council Tax Benefit, breaking the rules about making such announcements during the pre-election "purdah" period. On the other, they were quite happy to delay other politically sensitive announcements because of the election, such as that on the Northern Isles ferry contractor.

On top of all that,  it appears that a Highland MSP has been using public funds to promote SNP Council candidates  who are also members of his staff. 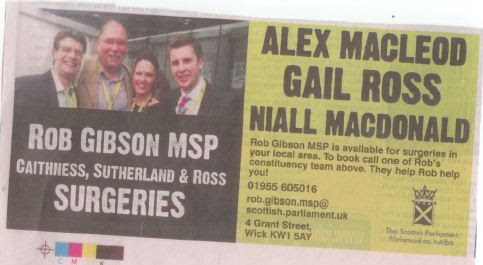 Note the Scottish Parliament logo in the bottom right hand corner of this advert for his constituency surgeries from the John O'Groat Journal. If this was funded by Parliamentary expenses, then it should not be giving star billing to SNP Council candidates. If it was funded by the SNP, it should not include the Parliamentary logo. Either way, they've made a mistake and it needs to be rectified. I understand that Highland residents have complained about this to the Scottish Parliament Corporate Body although no response has yet been received.

Have you ever heard of such unprecedented promotion of Parliamentary staff in an advertisement,  particularly one which is laid out in a style which reeks of party branding in terms of colour and fonts used?

In this second picture, you can see that the advert for a surgery falls directly below a report announcing the selection of Gail Ross for the Wick ward.

As one of these adverts was on sale on 22 March, the day election expenses kicked in, we'd expect, of course, to see its full cost split between the three candidates mentioned in their returns. But then it may well be an impermissible donation to their campaigns. It looks like they may be in some hot water. While Gibson claims that they were published before Highland Council's purdah period, this has no relevance to the electoral timetable and, frankly, we've already seen that Purdah only counts for the SNP when it suits them

Former Scottish Lib Dem leader Tavish Scott has written a letter of complaint to both the Presiding Officer of the Scottish Parliament and the Returning Officer of Highland Council to ask for this to be investigated. He said:

The SNP seem to think they have the right to bend, twist and break all the rules now that they have a majority in the parliament. Using public funds to buy votes is something you would expect from corrupt dictators rather than in a modern, democratic Scotland.
Strict rules exist to ensure the governing party cannot use public office for party political gain, but appointing Derek Mackay as their election coordinator while he is local government minister shows just how far they are willing to go to rig results.
Mr Mackay must be suspended from his post and an immediate investigation launched into the SNP misuse of public funds.

The SNP have been caught red-handed misusing public funds to rig the election. In using his position as an MSP to promote his staff while they are SNP candidates,  Mr Gibson has made it a hat trick of SNP election scandals.

There seems to be an outbreak of sleaze affecting the SNP at the moment. The way they have behaved since winning their overall majority last May has caused much controversy. They seek majority control over a number of councils next week. If this is how they abuse majority power, voters may baulk at the prospect.
Posted by Unknown at 3:30 pm

But of course contrast these with the strict compliance with the purdah period which Liam McArthur exposed when the Government decided it had to delay the announcement of the successful bidder for the North Isles ferries. Only a cynic could think they might have something to hide until after the election.