Conference: the good, the bad and the ugly

Now that I've had some sleep and recovered from the fun of Federal Conference in Brighton, I thought I'd share with you some of the highs and lows of a thoroughly enjoyable five days.

When Shami beat Paddy:  You don't often see Paddy Ashdown being completely bested in an argument, but Liberty director Shami Chakrabati managed it with aplomb. Paddy said in his speech to a packed Liberty fringe meeting  that secret courts were fine as long as everything was overseen by a Judge. Shami went for him. She said she knew she was abusing the chair, but it was her meeting and she'd do what she liked. She demolished his arguments to the great satisfaction of the room. At that point, it should have been clear to the leadership that they had absolutely no chance of winning the vote the next day.

The secret courts debate: This debate showed the Liberal Democrats at their best, getting to grips with a difficult subject. The leadership had lined up popular MPs Julian Huppert and Alistair Carmichael to put their case. Carmichael's speech was well-crafted and had exactly the right, reassuring tone, but Conference was never going to be persuaded. There were no speakers on the side of the amendment who weren't in Parliament. In contrast, there were some passionate and persuasive speeches from motion proposer Jo Shaw, whose remarks were published in full on this site on Friday, first time speaker Ruth Edmonds and Jo Hayes among others. Bridget Fox said that if secret courts had been allowed, she would never have been able to clear her name when she was reported to the Standards Commission.

Jo Swinson's speech: Jo's debut platform speech as a minister was a statement of intent as to how she was going to make the workplace more equal and working life more fulfilling for people.
She said:

I feel incredibly lucky to be doing a job I love, as MP for my home seat of East Dunbartonshire. I’m also really enjoying the new Ministerial post with all the exciting challenges it brings.  But like most people in this hall I expect, I know what it’s like to have a job where you’re clock-watching, or feeling unfulfilled.  I have worked in a fast-food restaurant where the cries of “how many bodies do we have on the tills?” made me realise I was less a valued member of staff and more a production machine.  I have worked in the Disney store, where even for someone with my cheery disposition, the enforced perma-smile was too much to bear.  And I have worked for a local radio station, where the great charity work we did at the grassroots was measured by the parent company solely in terms of positive column inches, which was so demoralising for the team.
Without a doubt, I know that I have been at my most productive, creative and effective when I have relished going to work. It’s only natural.  When employment has risen significantly but GDP has not, we do need to ask the question, are we doing all we can to unleash the potential of our most precious resource – our people?

It was practical, relevant and emotional as she mentioned her 99 year old Nana at the end. It even had a Doctor Who reference. You can read the whole speech on my blog here.

Citizens UK thanking us for delivering on our pledge to end child detention for immigration purposes: I wrote about this colourful and emotional event last week. Citizens UK are now running campaigns to get employers to pay the living wage and on restraint purposes during deportations.

Assisted dying debate and Dignity in Dying fringe: Our decision to press for legislation on medically assisted dying came at the end of a harrowing, emotional and high quality debate. Speakers gave accounts from their own personal experience of caring for sick and dying relatives. Ian Swales and Lorely Burt were two MPs who spoke in favour. The fringe run by Dignity in Dying two days later looked at where we go from here. Particularly moving was the account from the family of a doctor who had the best possible palliative care as she died, but who still suffered terribly.

The economic growth debate: I wish Conference had been allowed to have a full debate on the economy. The Party's Federal Conference Committee chose Liberal Left's amendment rather than one which would have been much harder for the leadership to defeat. The atmosphere could have been electrifying.

The family wasn't complete: I know at least 20 people who didn't go because of the system of police accreditation just in my circle of friends. They were missed.

The weather: Saturday was glorious, but then the coast was lashed by wind and rain. I am not a slight person and I was almost blown over. Funnily enough, the weather calmed down after Nick Clegg's speech. If that was all it was going to take, we should have moved it forward to Sunday afternoon.

The media: Their desperation to find someone willing to trash Nick Clegg was palpable. They found virtually nobody willing to do so. And when they couldn't get what they wanted, they just made it up. Nottingham's Alisdair McGregor was quoted in the Financial Times (who should know better) saying, about Paddy Ashdown's appointment as General Election Chair:

He doesn’t just march towards the sound of gunfire, he will raise the dead.

What Alisdair actually said, and I know this because I was standing next to him, was "He doesn't just march towards the sound of gunfire, he runs."

I managed to escape to Peter Andre's coffee shop and I can report that the chocolate milk shakes are delicious. 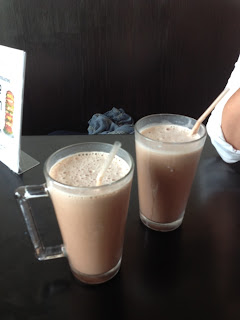