Let's get Nick to Number One

After Nick Clegg's apology last night, some creative souls thought it would be a good idea to run it through autotune and release a spoof version.

After the spoof delighted You Tube viewers and social networking sites, its creators, satirical outfit The Poke, contacted Nick via Twitter to ask if it could be released as a single. His reply came very quickly: 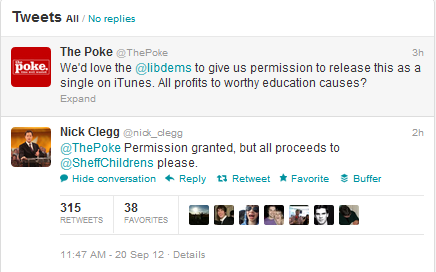 The more exposure Nick's apology gets the better as far as I am concerned.

In our unforgiving, macho political climate, saying you got something wrong and saying sorry for it is a brave thing to do. Nick accomplished it with great sincerity and authenticity and it was one of the best apologies I've ever heard.

I've felt pretty much since the tuition fees debacle happened that the only way we would stand a chance of getting people to  trust us again would be to acknowledge that we had done the wrong thing in signing that pledge and then breaking it. I truly believe that had we been in Government on our own, we would have fulfilled it, but it was foolish to sign a third party organisation's pledge in the way that we did. We certainly won't be doing that again.I just hope that we don't lose our radicalism when it comes to developing our manifesto. We can't afford to be timid and bland. Boldness and distinctiveness are going to be more important than ever as liberal values come under attack not only in this country but internationally.

Normally when politicians apologise, for example  Gordon Brown over slavery, it's because of things other people have done. You don't often see them taking responsibility for their own actions. It's far too risky in the destructive political bear pit that passes for political debate in this country. It will take some time to win back trust. I note that Nick's apology talked about the protection of the vulnerable, which makes it even more important that he wins the battle on uprating benefits that I wrote about the other day.

Anyway, enjoy the autotuned version as Nick sings sorry. Let's all buy it when it hits iTunes so it gets to number 1.

Sadly I cannot believe it was a genuine apology - the timing, right ahead of the Lib Dem conference, is highly suspect. And he didn't apologise for breaking his promise - he apologised for making it in the first place, saying they couldn't have kept it. Sorry Clegg, but you knew how the finances were long before you got into bed with Cameron.

So, no. Apology absolutely not accepted.

As for the Autotune version - Ok, the proceeds will go to Sheffield Children's Hospital, so I can absolutely support that. I bet you any money, though, that Clegg will use it for political capital.

And after the hell this Coalition is putting disabled, low earners, students and many others through, that's something I don't think I can stomach.

An apology isn't enough on its own - surely it's about how you put something right? So to answer the question at the next election which the party had already answered - "what do you give to your children - an education or your house when you're gone!"

Sorry, that's a bit pointed isn't it but it's about tax and spending priorities is it not? It's about how fair it is on those who have to pay for an education which you (and I) had for free and who will pay for your (and my) retirement, who will then struggle to afford a home themselves.

It's a question of intergenerational fairness which can't be swept aside by saying it's tough luck - or that it's the price of wider access. It's cynical to say that it was an undeliverable pledge - that's political reality, not fundamental principle about how education not only benefits an individual but the economy overall, and that the burden between generations should be shared across generations.

John Miard
The level of student loan debt in the US has reached $1 trillon.
I question whether making most young people go to university is really a good thing.Academics in Taiwan are beginning to realise that the needs of the labour market of that country are not met by such a system. A more flexible approach is needed in Britain, one that would provide young people with vocational training for highly skilled jobs.