The SNP's Guide to Appropriate Behaviour

Even when it happens at a rally to honour our Olympic athletes.

So said Glasgow SNP Councillor Mhairi Hunter to me in a tweet on Saturday. 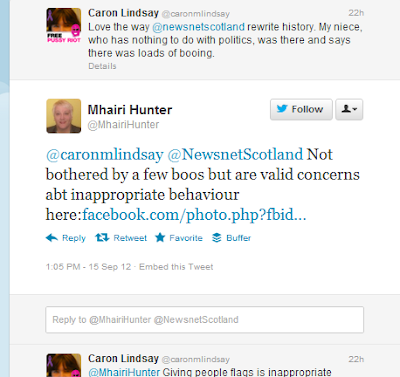 I was a bit fearful as I clicked on the link, worried that it was going to be a sorry tale of some anti independence idiots beating up a nationalist. No, it was to this Facebook page from the No to Scottish Independence and Protect the Union where they said they handed out 1000 union jacks to people who went to the Olympic and Paralympic parade in Glasgow on Friday.

Hanging around with violent revolutionaries is fine, until you're found out

Scotland on Sunday reports that the Scottish Republican Socialist Movement had been invited to a rally for independence which takes place in Edinburgh next weekend.

A quick glance at their website finds exactly how they wish to achieve their aims:

The ruling class must be completely overthrown to achieve true Scottish Independence and freedom. Because the ruling class will not relinquish power without their use of armed force, this revolution will be a time of violence as well as liberation. Unions by their very nature cannot become vehicles for the revolutionary transformation of society.

Now that the papers have found out, the SRSM have been barred from the match. If they had not found out, our First Minister would have been at the same event as this charming bunch.


For months the SNP have been more than happy to receive support from these extreme groups with their menacing message. This just shows the ragtag company Alex Salmond is prepared to keep to split Scotland from the UK.

This group wanted to violently smash up society as we know it in order to achieve  independence. What other unwanted groups have the SNP attracted to their campaign.

So let me get this straight, you're having a go at the SNP for hanging about with an unpleasant organisation, on the basis that the First Minister was going to attend an event which was not organised by the SNP, and whose actual organisers swiftly moved to ban the group concerned when they realised their views.

In fact, however misguided you beleive their views to be (go and have a look at their web-site... it's like reading about splittists and the People's Front of Judea....) they actually deny any intention of burning Union flags.

They do appear to believe that their desired end of the overthrow of the ruling class will be a time of violence as well as liberation, because the ruling class will not relinquish power without armed force. Whether that amounts to actually calling for and supporting such violence is another matter. Presumably if the government thought they were a threat, they would be on the list of organisation which are banned? Or do you think free speech doesn't include the right (however misguided) to call for revolutionary change?


So, for all the huffing and puffing of the Unionist press, this is a total non-story which you are happy to hype? This is a non-SNP event, the SRSM were listed as one of many groups attending (they weren't invited, and neither was anybody else technically), and the organisers banned them as soon as it was known their views were pretty whacky.

So why should any unbiased observer see you contribution as anything more than piling onto the band wagon of those attempting to smear Alex Salmond for party political motives?

Indeed Galen. As a Scottish Lib Dem I am becoming increasingly embarrassed and frustrated by the obsession we seem to have with Alex Salmond, especially when it manifests itself in pathetically weak arguments such as this.

To be honest Andrew, if I were you I'd be going back to your constituencies and preparing to found yurselves a new party. Whether the Scottish people vote YES in 2014, or whether it takes a little longer, it seems to me the destination is no longer in much doubt.

The arguments of the Unionist parties are appearing increasingly desperate and hysterical. The much vaunted positive case for the Union is nowhere to be seen, and neither is the explanation of what "jam tomorrow" means, or how on earth it will be delivered.

Playing the man rather than the ball is a sure fire sign that those using the tactic are out of ideas. Big Eck, for all his faults, enjoys approval ratings that must make Davidson, Lamont and Rennie weep, never mind Cameron, Miliband and Clegg.

I think it has already dawned on many Scottish Tories, and an increasing number of Scottish LD's that they might as well throw in the towel and either support the SNP (even if they won't join it), or at least start preapring the ground for a post-independence party to represent their interests.

Scottish Labour is probably a harder nut to crack.. but given the lamentable stance they have adopted since the last Holyrood election, their second rate leadership, and their growing internal problems and tensions caused by sharing platforms with the Tories and LD's on the referendum issue, I think we can confidently expect the cracks to get wider.

Sadly, it seems like the views of many loyalists like Caron are quite common. "Group think" dictates that the opposition must always have the worst of motives, and that no story, however trivial, and however unsecurely based, is too trivial that it cannot be spun into a damning indictment of their stupidity, badness, or just plain wrong headedness. It does those jumping on the bandwagon no credit. they aren't fooling anyone but themselves.