Do you know, I feel a bit like Cilla Black? You can hardly have failed to know, courtesy of the big box in the sidebar, that I'm supporting a new grassroots campaign which aims to get the editor of the Sun to pull the Page 3 feature. As I was writing this round up post yesterday, 2000 signatures were added. That made 6,000 in 24 hours and there have been more since. We're now just over 2000 away from 20,000.

Anyway, yesterday afternoon, I sent a tweet to the excellent Scotland Tonight (which whips the backside of Newsnight Scotland by a long way) asking if they were planning on covering the No to Page 3 campaign. The rest, as they say, is history. A great match facilitated by me. 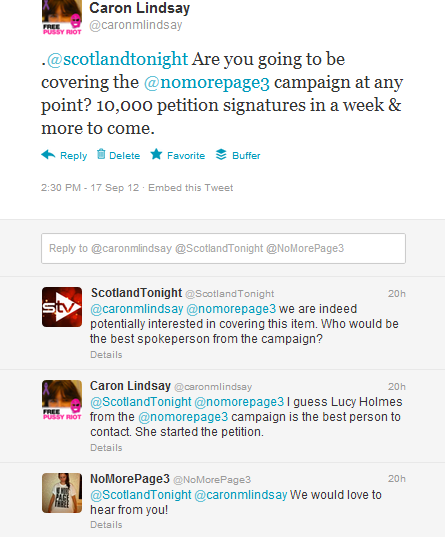 Lucy Anne Holmes, who started the petition off, was interviewed alongside Martel Maxwell,a writer and journalist who worked for the Sun for 10 years. You can see the whole thing here from about 20 minutes in.

Lucy played an absolute blinder. Yes, she was a bit nervous, but she was passionate and articulate and generally awesome. These are just a few of the things she had to say.

"We're appealing for the Sun editor to represent women with respect, like he represents men."

"These papers aren't bought under the counter. They are everywhere in our society. Page 3 makes the blatant objectification of women ok and a bit funny."

"There are plenty of places men can see breasts. I don't think that this sort of imagery should be in a family paper. The paper has men dressed going about their business, running the world and doing all sorts of good things and they see this massive image of a woman in her pants doing nothing. That's really powerful. It puts women in a limited place in society."

"I actually think it's very interesting how people say "look at the tits on that." She become a that, a object dehumanised. When we start dehumaising people, that's when bad things happen, from the leering to the feeling entitled to the body because it's dehumanised."

"Men don't need to see nipples to read the news."

She cited the example one signatory gave. You might not buy the Sun, in the same way you'd never dream of owning a slave in those days - but that doesn't stop you campaigning against the idea of slavery.

It made me a bit sad for Martel Maxwell to be building up how the Page 3 models are adored by men when they go out to clubs. Hmmm. Do I want to be adored and given presents and patronised and bought drinks by men in clubs, or be seen as some sort of trophy,  or do I want to be treated like an equal and taken seriously and have genuine power and influence? Tough question, not.