Yesterday I wrote  about how SNP MP Pete Wishart had taken to Twitter to throw some personal insults around about Mike Moore and Jo Swinson. Ok, so he didn't actually use any sweary-words, but  suggesting a panda, which sleeps 20 odd hours a day and chomps bamboo the rest of the time, would be a better Secretary of State for Scotland can never be construed as polite. And his extraordinary press release the other day described Mike as attention seeking and pointless and painted a picture of a man desperate to save his job. They clearly have a quality control problem in the SNP Media Centre.

When the supporters of independence have a growing cybernat problem, you would think it would be sensible for their elected representatives to behave with a bit more decorum. 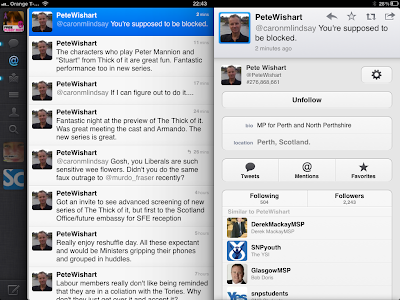 Yip, he's blocked me. Although it did take him two attempts.

I assume it's because he wants to continue behaving badly without me telling the world about it. I tend to do that with anyone who behaves rudely or unpleasantly towards other people. I supported Eilidh Whiteford completely over the way Ian Davidson behaved towards her, for example.

I can't see Pete Wishart's timeline, but if you see anything from him, or anyone else behaving disrespectfully towards opponents, diminishing and dumbing down the quality of debate, screengrab it and send it to me. It's time to name and shame those who drag our political environment into the gutter.
Posted by Unknown at 8:17 am

I find that significant as she is comparing her across the political spectrum with political performers of all parties and she is outside the distortions of the Scottish bear-pit.

Might it be that some of the SNP narrative against her is nonsense?

Of course it's nonsense. And you are right - I'm so glad she's now gone into Government.

Why do you the Unionists feel so threatened that they always have to flag up the so called Cybernat problem? Especially when we all know that there is an equal and opposite Cyberbrit problem that slags off Alec Salmond on twitter as being fat, eating all the pies and so on. And was particularly in evidence recently when we were all treated to a host of anti-SNP and anti-Alex tweets after the opening ceremony of the Olympics and when team GB were doing so well. Indeed I remember reading an awful lots of tweets that referred to Alex as a c**t. Do you actually condone Alex being called a c**t on twitter?


Where were you and your bleeding heart then Caron? There were no outraged posts filling your blog which seems to suggest that Pete is right and your outrage is a total fake.


I also think that you are hardly the one to lecture on people being blocked on sites after all the protracted discussions we have had on your tactics for preventing timeous posting of any comments that either disagree with you or which you cannot answer. You have a history of not putting up comments in good time for them to feature while a story is still relevant while churning out a serious of ludicrous excuses which our discussions have shown to have held no water. In the end I was tritely informed you had a life (as if I didn’t) and since then I am lucky to get an answer even to the most reasonably put comment, although to be fair you have always put them up (eventually).

Munguin, as it happens, I have on plenty of occasions taken all sorts of people to task. Had I seen people call Alex Salmond that, then, yes, I would.

I really liked this piece that talked of how the majority of people who don't behave badly online should drown out the minority who do.

I think you assume a lot more goes on in my head than actually does. Let me tell you how I deal with comments. I see them, I approve them or otherwise. It's really not that often otherwise. Sometimes I don't see them because I'm working or doing other things or my daughter but I generally don't hang about in dealing with a comment when I've seen it.

If you think I have space in my head for the devious machinations you have outlined, you are sadly mistaken.

I love the way you go on for ages and then grudgingly at the end admit that I always publish your comments anyway.

I think that the cybernats are a problem. Over on Lib Dem Voice someone left a comment implying that they were all unionists in disguise, which amused me, by the way.

We all have to get on the day after the referendum and interventions like Wishart's don't help to foster any sort of spirit of mutual respect.

It's time to name and shame those who drag our political environment into the gutter.

Or is linking someone to a harmless panda more offensive in the LibDem camp than passing misinformation to your fellow citizens?

Vote YES in 2014 to get away from these poor didums.

Caron: perhaps a more balanced approach would be to admit that there is cyber bullying on both sides of the debate and not as you imply in your original article and in this one, that it is mainly a nationalist problem. You point this out, Lord Foulkes like, early in both items and make no effort whatsoever to temper that with an acknowledgement that what you are talking about is a two way street. That is either pure bias, plain and simple or sloppy reporting. I will leave you to decide which!

Thanks for, once again, explaining how you do your comment moderation. I’m not saying you do now, (and I don’t grudgingly admit that, I just admit it in the interests of equipoise) after I have made an issue out of it. But in the past, I still think that you did. As do your colleagues on Lib Dem Voice and your fellow Unionists on Tory Hoose and Labour Hame. It seems to be a favoured stalling tactic no matter how transparent.

As to Pete’s comment. I can detect a tongue in cheek aspect of it even if you can’t. And even, heaven forbid, that he was being a bit rude at the impression that Mike Moore gives as being the Tories man in Scotland rather than Scotland’s man in the cabinet, he is not the only one. As your lamentable performance in all recent Scottish elections bears testament.

Tell us again where Mike featured in the recent poll, conducted by Lib Dem Voice, of how well Lib Dem ministers were doing?

I thought I would wait a few days (so that I am not accused of being hysterical) before pointing out that there is (once again) a comment made by me missing from this thread. Caron why is it that this is something that seems to recur on here again and again? No doubt we will get the usual verbiage about you being busy, ghost in the machine and so on and it’s not a tactic used to stifle debate but in a nice way even if that is what its repeat occurrence makes it seem!

Gutted to discover that, unknown to me, there was a comment from you that I hadn't seen.

However, if you were that bothered about its non-appearance, you could have emailed me or left another comment. You should know by now that I publish everything when I see it. If it's not published, it's cos I haven't seen it, not cos of some conspiracy.

It's not as if there was anything particularly exceptional about your comment.

There are ipeople who go too far on both sides of the debate. Amongst MPs, ian Davidson & Pete Wishart are among the worst offenders. However, I think the cybernats are much worse and more intense. I was talking to some Nats the other day who thought exactly the same & cringed when they saw the bile their own side produced.

Caron I’m simply amazed that you did not manage to see two comments that were posted with a five minute interval! It is simply not credible for you to claim that you “did not see” the first one until a week later (and until I pointed it out to you) unless the intention was to stifle debate, which I firmly believe it was.

If my comments are too unimportant for you to notice or beneath your dignity to consider please let me know and I wont waste my time writing any more!

I believe the intervening period was 4 days, not a week.

I'm sorry I didn't see the second comment - I usually publish them from email and I've obviously got myself confused somewhere and deleted a comment notification that hadn't been published.

I don't really care whether you believe it or not - but I know that I don't and never have acted as you suggest. I always deal with comments as soon as I am aware of them. I don't always get round to replying to them straight away because I don't have the opportunity, but I do my best. That may not be good enough for you, but it's the way it is.